An estimated 1 million people thronged the parks and roads around the palace, including the thousands who waved the Union Jack flag in the plaza directly below.

Britain's Queen Elizabeth meets, from second left, Ricky Martin, Sir Paul McCartney, Sir Cliff Richard and other performers on stage in the gardens of Buckingham Palace. A rock concert Monday was the second concert to commemorate the queen's Golden Jubilee.

The crowd cheered wildly, starting with the opening act of "The Party at the Palace" ï¿½ guitarist Brian May of the group Queen, who stood on the palace roof with his long hair flying and sang "God Save the Queen. They were still hollering when the queen came out to address the crowd at the end of the concert, which closed the third day of the four-day jubilee.

Puerto Rican singer Ricky Martin went straight into "The Cup of Life" with a brief assist from Mis-Teeq, and then sang "Livin' La Vida Loca."

More than three hours later, the concert ended with McCartney singing a medley of Beatles' classics, such as "All You Need Is Love," "Sgt. Peppers Lonely Hearts Club Band" and "Hey Jude."

Some of the songs McCartney sang alone, some with rock stars from his generation such as Clapton, Rod Stewart and, Joe Cocker, and two at the finale with the many other performers from the gala.

His performance for the reserved monarch also began tongue-in-cheek with a Beatles' song that includes the line, "Her majesty's a pretty nice girl, but she doesn't have much to say."

When the music ended, Queen Elizabeth II led the royal family on stage to thank the performers.

"We feel proud of you, proud and grateful for everything you have done for your country and the Commonwealth over 50 extraordinary years supported throughout by my father," said Prince Charles.

At the end of the concert, a 14-minute firework spectacle filled the skies over central London with color and light, while a sound and light show decorated the front of the palace. 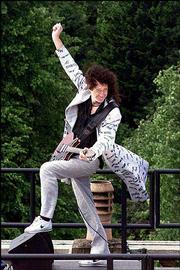 Brian May, the guitarist from the rock group Queen, plays "God Save the Queen" from the roof of Buckingham Palace. May's guitar solo opened Monday's rock concert at the palace.

More than 12,000 lucky ticket holders were in the queen's back garden at the palace, standing and swaying to the music. Prince Charles and his sons, Princes William and Harry, laughed and cheered with the rest of the fans, while other young royals joined in the fun.

William clapped enthusiastically at the arrival on the huge stage of S Club 7, and he and Prince Harry raised their hands over their head applauding for Ozzy Osbourne's performance of the Black Sabbath anthem "Paranoid."

Beach Boy Brian Wilson sang "California Girls" on his own before pairing with Clapton, then The Corrs, and finally pulling the audience and much of the rest of cast into "Good Vibrations."

Clapton returned with "Layla," accompanied by Phil Collins on the drums.

Stars from every generation were on the bill: Elton John on tape, Atomic Kitten, Blue, Emma Bunton, Steve Winwood and Shirley Bassey.

Tom Jones sang two songs, including one from the movie "The Full Monty," and the rock group Queen did four, with several artists singing the lead vocals of Freddie Mercury, who died of AIDS in 1991.

Prince Charles' companion Camilla Parker Bowles, sitting in the third row of the Royal Box, led the clapping as Collins and Queen drummer Roger Taylor took to the stage with a Motown tribute and a version of "You Can't Hurry Love."

The show included sequences as diverse as an onstage interview with Muppet Kermit the Frog, Tony Bennett singing with the accompaniment of a symphony orchestra, and the Eurythmics' Annie Lennox singing a pop classic.

The crowd cheered wildly as the queen and Prince Philip showed up in the last half.

As with the classical concert held at the palace Saturday night, the pop celebration was being broadcast nationwide on television.

The crowds had been a "joy to police," said Deputy Assistant Commissioner Andy Trotter. "There has been no trouble. There has been a great humor about the event."

At the end of the concert, just before the fireworks, the queen lit a huge beacon ï¿½ the final one in a series stretching through the United Kingdom, the Channel Islands, and some 50 other Commonwealth countries.

One of the beacons was lighted Monday atop Mount Kenya, not far from the Treetops camp in Kenya where a 25-year-old Princess Elizabeth learned of the death of her father, King George VI, Feb. 6, 1952, and acceded to the throne.