The motion for disqualification by Ryder's attorney, Mark Geragos, was placed under seal, but he had said previously he believed prosecutors were not treating his client fairly. 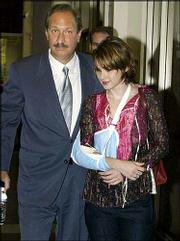 Ryder said little during her arraignment.

Superior Court Judge Elden Fox asked the 30-year-old whether she was entering a plea of not guilty, and she responded in a soft voice, "Yes, your honor." She and her lawyer left the courthouse without commenting outside.

Ryder was ordered last week to stand trial on felony charges alleging she shoplifted some $6,000 worth of merchandise from Saks Fifth Avenue and illegally possessed a drug without a prescription.

The actress, who co-stars in the upcoming Adam Sandler comedy "Mr. Deeds," is charged with second-degree burglary, grand theft, vandalism and possession of a controlled substance.

Ryder faces a maximum of three years and eight months in state prison if convicted on all charges. She remains free on $20,000 bail.

A store security official testified during a preliminary hearing last week that she saw the actress cutting security sensor tags off the items, and a criminalist testified that two pills found in Ryder's possession were a generic form of Percoset, a prescription painkiller.

Fox said then that there was sufficient cause for her to be tried.

Friday, the judge set a pretrial hearing for July 15 and said Ryder didn't have to attend. He also ordered that any motions concerning possible prior acts by Ryder be filed under seal. A tentative trial date was set for Aug. 13.

Prosecutors have said they may introduce evidence of prior misdeeds by Ryder.

A notice filed with the District Attorney's Office last month indicated the prosecution plans to show that the "Girl, Interrupted" star's alleged shoplifting is part of a pattern of behavior.

Sandi Gibbons, a spokeswoman for the District Attorney's Office, has declined to provide details of the evidence, saying prosecutors would save that material for court.

If Ryder's motion to remove the District Attorney's Office were granted, the state Attorney General's Office would prosecute. Gibbons said outside court Friday that such motions were rarely granted.

She also said the district attorney preferred all motions unsealed.

"We want a televised hearing and we want everything filed in the open," Gibbons said.

The judge has refused cameras in the courtroom and continues to issue orders sealing most documents in the case from public view.

Ryder came to court last week with her right arm wrapped in an elastic bandage and held in a sling. Geragos said Ryder's right arm broke at the elbow when she was "whacked" from behind while walking through a crush of reporters at the courthouse, delaying the hearing by several days.