British mark queen's 76th with 'Trooping of the Color' parade

London — In the latest display of pageantry and splendor in Queen Elizabeth II's Golden Jubilee year, hundreds of guardsmen in impeccable red coats and black bearskin hats saluted the monarch Saturday to mark her birthday.

Two white horses led the queen's open carriage from Buckingham Palace down The Mall to the Horseguard's parade ground, where she inspected rows of soldiers who stood at attention with bayonets fixed. 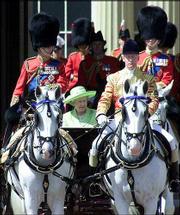 Queen Elizabeth leaves Buckingham Palace in London in a horsedrawn carriage to start the Trooping of the Color ceremony. The Trooping of the Color, one of Britain's most splendid parades, was conducted Saturday as part of the official celebration of the queen's birthday, although she actually turned 76 on April 21.

The Trooping of the Color, one of Britain's most splendid parades, is part of the official celebration of the queen's birthday, although she actually turned 76 on April 21.

She marked the occasion then with a low-key private celebration and royal gun salutes in London, Edinburgh, Cardiff, Belfast and York.

But no matter when the reigning sovereign was born, the pomp always waits until a Saturday in June for the parade.

The queen looked serene as she rolled into the parade ground off Whitehall, central London, wearing a light green suit, a matching wide-brimmed hat and white gloves, with a gray blanket covering her legs.

She was followed on horseback by her husband, Prince Philip, son, Prince Charles, and daughter, Anne, the Princess Royal.

Princes Andrew and Edward and the Countess of Wessex had arrived earlier in an open carriage to watch the parade from a nearby balcony.

Watched by thousands of spectators, the queen stepped down from the carriage and climbed stairs onto a raised dais to receive the first salute, as the national anthem was played by a military band.

She then got back into the carriage and was trundled through the parade ground to inspect the troops.

The ceremony, which lasted more than an hour, dates from the early 18th century.

Every year, a regiment is chosen to present its color, or flag, to the monarch. This year it was the Scots Guards.

The color ï¿½ a flag of crimson silk embroidered with the battalion badge, battle honors and motto "En Ferus Hostis" ï¿½ Latin for "Behold a Fierce Enemy" ï¿½ was presented to the 1st Battalion Scots Guards by the queen at Windsor Castle in April.

Trooping originated centuries ago, when flag carriers would march through ranks of soldiers on the eve of battle so all would be able to recognize their banner during fighting the next day.

The queen has attended the annual parade every year of her reign, except 1955 when a national rail strike forced its cancellation.