His name was Oliver Garland. He was a disgraced, conservative federal judge. His life story would not go away. The legal thriller Carter felt inspired to write also seems likely to stick around. 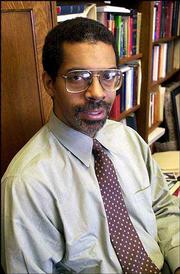 Stephen L. Carter, a law professor at Yale, has released his fiction debut, "The Emperor of Ocean Park." A publisher paid $4 million for the novel and a second book.

"The Emperor of Ocean Park" was subject of an intense bidding war, with Alfred A. Knopf paying $4 million for the novel and a second book. The excitement comes not just from the story about the judge's death, but also because it involves the black American upper class, a world seldom written about in literature.

"My goals were to write a book that would let the characters who had been living in my mind tell their stories. I thought, 'If some publisher prints a few thousand copies, OK,"' says Carter.

But he never expected the reaction he received when publishers saw his manuscript. "To my surprise, people were deeply enthusiastic about it. I was floored," Carter says.

The book marks the fiction debut of the law professor, who is better known for his nonfiction works, which include "Reflections of an Affirmative Action Baby" and "The Culture of Disbelief."

"If it was just a thriller, it would not have generated this buzz," says Carter's New York agent, Lynn Nesbit. "It's fresh. It's exciting. It has an incredibly strong driven narrative with a cast of characters that are highly developed."

Reviews of the book, however, have been mixed. The New York Times praised the "affecting portrait" of the family in the book while deriding some "hokey" plot devices that keep the thriller aspect of the novel afloat.

The story centers on Oliver Garland, who had a disastrous confirmation hearing when he was nominated for the U.S. Supreme Court. When he dies, a series of scary and sinister events leads his son, Talcott "Misha" Garland, to investigate the judge's death.

The mystery travels through upper-class black society in Washington, D.C., the college campus where Talcott teaches law and the summer playground of Martha's Vineyard.

While Talcott tries to solve the mystery, he struggles to keep his professional and family life from falling apart.

The case is solved through a series of diverse clues, ranging from an arcane chess problem to the federal court system to the 1960s civil rights movement.

Comparisons between Carter and his protagonist are inevitable, but Carter insists they are not at all alike. While Carter, 47, is friendly and quick to smile, Talcott Garland is a somewhat snobby sourpuss, quick to take offense at the smallest perceived slight.

Carter also does not share many of his character's views, though he declines to discuss which ones. However, Talcott is a more realistic character because of his faults, the author says.

"He has a more dismal view of the world than I do," says Carter.

Through Talcott Garland's eyes, the novel also is laced with social commentary about race and class. For example, Talcott often refers to people as members of "the darker nation" or "the paler nation," instead of "black" or "white."

The effect is immediate, since most American fiction writers take for granted their readers will assume that their characters are white, and so they only racially identify nonwhites.

"I wanted to bring some distinctions to my book ï¿½ wanted to make clear there are people of a variety of different colors and backgrounds," Carter said. "Everybody is not white."

Carter joins a legion of lawyers who have become novelists ï¿½ some to great success, such as Scott Turow, John Grisham and Brad Meltzer.

"Every trial lawyer is a storyteller, and the best ones have a narrative gift," he said. "That's what makes them as good at their work as they are."

Carter also has crossed over from nonfiction to fiction, a sometimes difficult transition.

However, Nesbit points out, most nonfiction writers do not have as much commercial success with their fictional works. Those who have done quite well and generated excitement in the process include Tom Wolfe, Thomas Harris, Edith Wharton, Pete Hamill and Jimmy Breslin.

Carter said he would continue teaching law and religion and contract law at Yale, where he has a reputation of being a thoughtful and dedicated teacher, Kronman says.