Ben Folds, formerly of Ben Folds Five and now accompanied only by his Baldwin grand piano, performed before a sea of adoring fans Friday night at City Market in Kansas City, Mo. The near sell-out crowd put up with 90-degree temperatures, portable lavatories and inadequate parking in order to press to the stage and sing along with every word Folds sang.

For nearly two hours, Folds surveyed the catalog of songs he recorded with his band while repeatedly returning to material from his current release, "Rockin' The Suburbs," his solo debut.

Though Folds played nearly all of the instruments on the recording, he wisely chose to tour with these songs stripped bare, rather than attempting to recreate the studio effort with side musicians.

That's for the best. Folds is a skillful and inventive pianist and a gifted singer working his self-professed "sissy-voice" to fine effect. But at the heart of things, Folds is a songwriter of a very high order. A clever wordsmith, he still knows when to leave emotions laid bare. Gifted with humor and pathos, Folds can and does write about almost anything, sounding just as genuine in his humility as he does in his rage, and letting listeners know where the sincerity lies within his wry humor.

After opening with "Eddie Walker," Folds performed "Zak and Sara," "Annie Waits" and "The Luckiest" from the new release before returning to chestnuts like "Where's Summer B.?" and "The Last Polka."

Before performing "The Luckiest," he explained that he normally doesn't perform the song so early in the show, but since the tour was being recorded for a live album, he was doing so because later on he'd be sounding too much like Tom Waits. 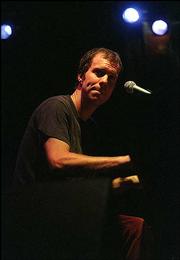 Folds told the tale of a lingering contractual obligation to render 4.61 more songs to satisfy his publishing company and buy his freedom. Speaking of his distaste for producing junk for the sake of a buck, he finally had found the justification to do so and explained how the songs, which he never intended to actually perform, had begun to give him enjoyment.

Of these, he performed "The Secret Life of Morgan Davis," a Broadway show tune-styled opus about a bored broker who takes to sneaking out on his wife at night to sell crack, and the self-explanatory "One Down, 3.6 To Go."

For the sake of the live recording, Folds took a stab at the subtle and stirring "Narcolepsy," a song he seldom performs.

One of the highlights was the last song of his encore, the popular "Song For The Dumped," with its refrain of "give me my money back, you b----," previously a rocker now made more humorous by Fold's recasting it as a somber ballad written in a minor key.