Men just want to have fun

Milan, Italy — Who said men don't know how to play the fashion game? 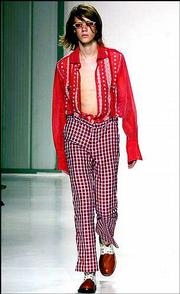 An open shirt is worn with checkered trousers at the Romeo Gigli men's fashion collection.

In their second line collections, Emporio for Giorgio Armani and D&G for Dolce and Gabbana, designers showed that menswear can be a whole lot of fun.

Wednesday at Emporio Armani, the men seemed to be having a great time tossing around a volleyball in beach outfits and scoring points with the gals who also sported Emporio creations.

From a large basket carried casually over his shoulder, a bare-chested male model dressed in bright fuchsia cargo pants threw silk ties into the audience, a clear "arrivederci" to conservative dressing.

Dolce and Gabbana brought the whole family to the beach Tuesday, setting up everything from sand to pails, beach balls to tables and umbrellas in the middle of the runway ï¿½ and outfitting the whole family, grandma and grandpa included. A good time was had by all.

Later Tuesday, Donatella Versace for her second line Versus collection took a tougher view of fashion fun, sending her boys down a dark runway for some black leather and chain gang entertainment.

Despite the holiday cheer, there were plenty of sensible suits and spiffy blazers in the Armani Emporio collection. In keeping with the upbeat mood, trousers are loose and jackets deconstructed, worn over open collared shirts, or clingy polos. Fabrics such as mixed viscose and dyed linen create an ultra-light, casually crumpled effect.

The cargo pants are ultra baggy with plenty of pockets, and often cropped at mid-calf. Belted bathing trunks come in shiny surfer materials. 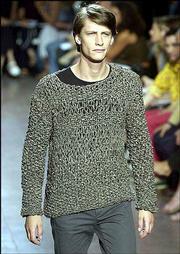 Byblos unveils a knitted sweater at its show in Milan, Italy.

The Armani summer palette is fashionably faded, ranging from sandy beige to ocean blue, with flashes of fuchsia and red.

Muscular daddy models circled the makeshift beach runway with kids in tow, followed by long-stemmed, short-shorted mom models, and proud grandparent models whose youthful attitude proved that fashion is a game for all ages.

The lights dimmed on the Versus runway, as tough guys in chain-belted tight black leather trousers, heavy duty black leather bomber jackets over a printed shirt and sharp studded boots marched down the runway to blaring heavy metal music. The scenario was a far cry from Emporio's beach volley, or D&G's family outing.

He's rich, relaxed and even risque, but never rough or raunchy. 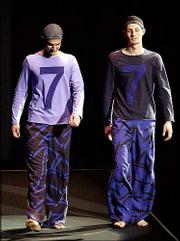 He wears his clothes with a casual nonchalance, as symbolized by the straw hat he sports with every outfit, tipped at a perfect cocky angle.

For beachwear, Ford prefers a sophisticated bikini tied at the hip and worn with an unbuttoned floral patterned shirt, or sporty boxer shorts.

Ford's fabrics are super-soft silks and satins, and his colors warm shades of beige, gray and jade.

"My man is a rock star in love with Japan, a country both very relaxed and very sensual," Ford said after his much-applauded show.

For the man who has everything but wants more, Gucci has introduced a custom-made line, which will outfit Mr. Luxury from top to bottom. With shoes alone starting at $1,000 a pair, the hand-tailored look promises to be a truly unique fashion experience.