Los Angeles — Long before Sept. 11, movie studios had rediscovered their love of the soldier. A rush of military dramas shot before the terrorist attacks are now riding a wave of public patriotism at its highest level since World War II.

By chance, Hollywood already had chosen to revisit notions of duty, honor, camaraderie and sacrifice in a range of combat arenas, from World War II and Vietnam to Somalia and Bosnia. 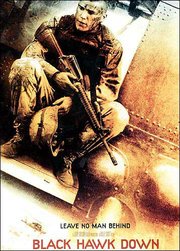 The courage-under-fire themes of "Black Hawk Down," "Behind Enemy Lines," "Hart's War," and the upcoming "We Were Soldiers" and "Windtalkers" would do John Wayne proud.

While generally projecting the U.S. military in a good light, the films are not so much exercises in flag-waving as they are acclamations of the fraternity of fighting.

"These guys went over there with ideals and pride and desire to be the vanguard of freedoms most of us take for granted," said Mel Gibson, who stars in "We Were Soldiers" as Lt. Col. Hal Moore, commander of the first big battle against the North Vietnamese in 1965.

"Once they got there, they were under siege, backs to the wall. They didn't eat or drink or sleep. Basically, it became that they were fighting for each other. It's not mom or apple pie you're fighting for, it's the guy next to you."

The winds of war 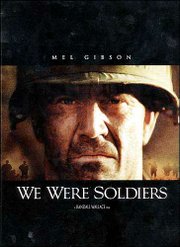 The call to arms for fresh war films came after a period of indifference toward the soldiery during the self-absorbed 1980s and early '90s. Cartoonish action heroes ruled the adventure genre, and the big war movie of the '80s was "Platoon," which presented Vietnam troops in an ugly light.

"Platoon" came after more than a decade of disillusionment with federal authority after the Watergate scandal and Vietnam pullout. Then, the military came to seem less relevant after the Soviet Union crumbled and the Pentagon closed bases.

"It was not the most popular thing in the world to be a soldier then," said Rod Lurie, a 1984 West Point graduate who directed last year's military prison drama "The Last Castle." "Soldiers were even looked upon as second-class citizenry."

In the mid-1990s, ceremonies, books and news coverage of the 50th anniversary of D-Day and the end of World War II rekindled appreciation for veterans. Tom Brokaw's World War II best-seller "The Greatest Generation" and Steven Spielberg's Normandy invasion epic "Saving Private Ryan" put human faces on that war for a generation that had not lived through it.

"The other part of it was, a lot of our fathers and parents who stood for those things the greatest generation has now become known for were beginning to die, quite honestly," said David Ladd, a producer on "Hart's War," which stars Bruce Willis as a fourth-generation West Point colonel plotting sabotage while imprisoned by the Nazis.

"You saw a lot more honor paid to the men who made the sacrifices, which had gone out the window for a while in the years before that."

Hollywood put a rush of patriotic combat films into production. Most of the footage in the current battle films was in the can before Sept. 11, but the attacks and the war on terrorism have heightened public interest in stories about soldiers of virtue. 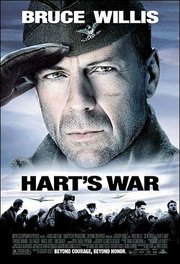 The '80s and '90s were a "fairly frivolous time," when Americans were more concerned with their stock portfolios than with political issues or military threats, said "We Were Soldiers" director Randall Wallace, who also wrote Gibson's "Braveheart."

"Great things did not seem to be at stake to people," Wallace said. "Sept. 11 reminded us there is such a thing in the world as evil, and there is the necessity for such things as duty, honor and sacrifice."

Before "We Were Soldiers," such nouns rarely applied to films about Vietnam. Robert Altman's "MASH" satirized the U.S. military in Vietnam under the guise of a Korean War setting. "Apocalypse Now" turned Vietnam into a surreal zone of madness and bestiality. "Platoon" depicted U.S. soldiers as drug abusers, back-stabbers and butchers of the innocent in a scene reminiscent of the My Lai massacre, in which Vietnamese civilians were killed by soldiers under the command of Lt. William Calley.

"Platoon" "took every bad instance that occurred in the Vietnam War, officers smoking dope with their men, sergeants killing each other, soldiers burning buildings. It was nonsense," said Moore, who retired in 1977 as a lieutenant general.

"Apocalypse Now," based on Joseph Conrad's "Heart of Darkness," "wasn't even about Vietnam. It was something else. I walked out."

Moore and journalist Joseph Galloway co-wrote the battle memoir "We Were Soldiers Once ... And Young," the basis for the film, which recounts their experiences during the ferocious three-day siege in the Ia Drang Valley.

Unlike past Vietnam movies, "We Were Soldiers" presents a close-knit unit of soldiers with a paternal commander. The troops are brave and honorable, earnestly loyal and willing to lay down their lives for a comrade.

"Hal and Joe felt that Vietnam guys particularly had really suffered at the hands of Hollywood," Gibson said. "I think the movies have always managed to focus on the exception, not the rule. There's no doubt that what Lt. Calley did over there was an atrocity. Atrocities happen in war. It's lamentable, and there's no way to justify it.

"But it was the exception among the rule. Everyone in Vietnam wasn't a drug-taking, baby-fragging wacko. They were mainly men and women doing their duty."

Said Moore: "The basic message of our book was hate the war but love the American warrior."

Films such as "We Were Soldiers" and "Black Hawk Down" border on anti-war sentiments with their grimly realistic images of men dying in battle, Moore said. The films are valuable, especially after Sept. 11, as reminders that freedom and prosperity still may require the sacrifice of American lives in battle, he said.

"These movies are pro-military. I would hope they help show the people of America the necessity for strong military forces. And when they see movies that show soldiers realistically fighting and dying for their country, I would say to the American people, they can be proud they have such men."