Novelist at center of 'Monster'

Opera seizes on how Mary Shelley came to write 'Frankenstein'

She was only 18 when a nightmare gave her the idea for the classic horror tale, and that's when the opera opens. 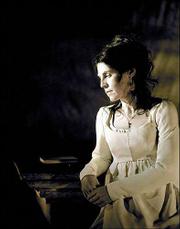 Gail Pearson appears as Mary Shelley in Scottish Opera's new production, "Monster." The opera, which focuses on the "Frankenstein" author, had its world premiere Thursday at Glasgow's Theatre Royal.

Shelley's novel was published in 1818, when she was 20, and it gained a new hold on the popular imagination when Boris Karloff portrayed the monster in the 1931 movie version.

"Of course, Karloff made it so famous, but there is absolutely nothing about him or the film in our opera," said Sally Beamish, the opera's composer. "My influences come from the novel, and our monster is rather more of an abandoned child: One's sympathies are always with the monster."

Beamish has been working with librettist Janice Galloway, a Scottish novelist, since they did a concert piece together about Shelley. It was performed in Scotland in 1996 with American soprano Lucy Shelton.

"We realized there was an awful lot more we wanted to do with the material. Janice was grabbed by what it was that caused this young woman to create this incredible story which has become so enduring," Beamish said in a telephone interview from her Scottish home in Gartmore village.

The collaboration led to a joint commission from Scottish Opera and the annual Brighton Festival in southern England for a full-length opera with full orchestra.

"I started composing the opera a year ago. It took me about nine months, but I had been thinking about it for five years before that," Beamish said.

A Londoner, Beamish played the viola professionally for 10 years before focusing on composing. Her violinist mother taught her to read and write music before words. She was composing at 4 and wrote her first opera at school when she was 7.

Beamish said the events of Mary Shelley's life came together in the Frankenstein myth.

Mary was the only child of radical parents. William Godwin was a political writer and novelist; Mary Wollstonecraft, who died 10 days after her daughter's birth, advocated equality of the sexes.

Mary eloped when she was 16 with the married poet Percy Bysshe Shelley, and they had a daughter who died within two weeks of birth in 1815.

The infant's death is seen as crucial to understanding the Frankenstein story; Mary's journals recount a dream in which the child is revived by rubbing it in front of the fire. Mary wrote of being plunged into depression when she awoke and found no baby.

"Mary also had an overpowering sense of guilt with the fact that her mother died giving birth to her and that her father disowned her when she eloped," Beamish said.

"So in a sense it was rather like her eventual story: The monster is created and its creator immediately disowns it and goes away from it."

The Shelleys were in Switzerland when Mary thought up the Frankenstein story, visiting the poet Lord Byron and his physician John Polidori at Byron's Villa Diodati on the shores of Lake Geneva. Rain kept them indoors, and Byron suggested that each tell a ghost story to pass the time.

Mary recorded that Shelley and Byron were discussing the nature of life, stirring her to invent her story.

While Karloff's monster was created by lightning striking human remains bathed in a chemical solution, the novel is vague about how the monster is given life, except to mention human remains and "chemical instruments."

There was much interest at the time in galvanism, the production of electricity by chemical action, and Shelley had a galvanic trough in his room.

In the opera, Mary reflects on the influence of Samuel Taylor Coleridge's strange poem "The Ancient Mariner." Coleridge, a friend of her father, had recited it in Mary's hearing when she disobeyed an order to go to bed.

"Mary was terrified by the poem and Coleridge has a big part in our opera," Beamish said.

"I think the opera's story is very moving, in the way the novel is, with the terrific sense of loss: Mary's lost baby, her abandonment by her father, her lost mother and being brought up by a stepmother with whom she had nothing in common."