Museum exhibit takes viewers out of this world

New York — Is there life beyond Earth? A new computer-generated show at the American Museum of Natural History probes the question by taking viewers from the blackest depths of the ocean to the cosmos outside the Milky Way galaxy.

It's quite a ride. The journey unfolds on the domed ceiling of the circular theater, where images from seven huge projectors form sights like a panorama of the surface of Mars. It feels like you're riding some kind of magic whale that can rise with speed and grace from the deep ocean to slip through the clouds and soar through outer space. 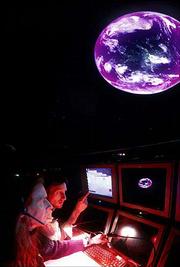 Members of the creative team at the Rose Center for Earth and Space at New York's American Museum of Natural History work on the new computer-generated show "The Search for Life: Are We Alone?" The 23-minute production probes the question of life beyond Earth by taking viewers from the blackest depths of the ocean to the cosmos outside the Milky Way galaxy.

"The Search for Life: Are We Alone?" replaces "Passport to the Universe," which took more than 3 million viewers on a different cosmic voyage during its two-year run at the museum's Hayden Planetarium. The original show, narrated by Tom Hanks, may return later.

Harrison Ford takes over the narrating duties in the new 23-minute production, which the museum developed with the National Aeronautics and Space Administration.

The new show continues the idea of sweating the scientific details. The 25,000 stars it shows in the Milky Way galaxy are in the right spots; so are the 28,000 other galaxies it depicts. And when audiences watch cosmic clouds condense to form stars, they're seeing the results of mathematical simulations designed to understand that process.

For a lay audience of museum-goers, isn't this overkill?

"We're a scientific institution. Our goal is to educate. ... We want to actually show the science," replied Anthony Braun, executive producer for the museum's Rose Center for Earth and Space.

Quite properly, the show doesn't claim to answer the question of whether there's life in outer space, because scientists don't know. A lay person who has paid attention to the topic won't hear any startling insights here either. But the presentation does review key points that scientists are pondering.

The visit to the deep ocean, for example, shows a perpetually dark environment where scalding hot water spurts from the bowels of Earth ï¿½ and where some organisms thrive. "Life is tougher than we thought," Ford remarks.

The show also notes the fairly recent discoveries of dozens of planets outside the solar system. "What are the odds that our planet is the only one with life?" Ford asks.

Some of these distant "exoplanets" have already been reached by radio and TV waves from old transmissions on Earth, the show notes. You have to wonder what any distant life form would conclude about whether there's intelligent life on Earth.

For all its focus on the possibility of life beyond, the show's closing words remind viewers that there's work to be done at home, too.

"If we can learn to protect our only home in the cosmos and the life that it brought forth," Ford says, "just think of the new worlds, and ways of being alive, that we might discover."