The football stadium at Haskell Indian Nations University was built in 1926 and remains the home of the school's football and track and field programs. The structure under the south bleachers known as Tinker Hall was used as residence space from the late 1940s into the 1970s. Since that time it has been used by the athletic department as the home of several of the school's intercollegiate sports programs. 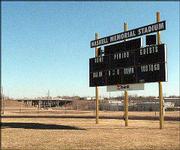 Haskell Stadium has been used for a variety of other events over the years, including Haskell's powwow. For the last several years the facility has been the home of the American Cancer Society's Relay For Life, which will be held there again June 7.

Excerpted from "Haskell History" at http://www.lawrence.com/localresources/haskell.html:

"Part of Haskell's attraction was not only its post high school curriculum but also its success in athletics. Haskell football teams in the early 1900s to the 1930s are legendary, producing famed athletes such as Jim Thorpe. And even after the 1930s, when the emphasis on football began to decrease, athletics remained a high priority to Haskell students and alumni.

The Quicktime plug-in is required to view this image, if you don't have it you can download it from http://www.apple.com/quicktime/download/.

Billy Mills, an Olympic gold medalist in the 10,000 meters, regularly comes back to Haskell to speak at functions. Today, Haskell continues to pay tribute to Thorpe, Mills and other great athletes by serving as the home of the American Indian Athletic Hall of Fame."

For more information about the American Indian Athletic Hall of Fame, visit http://www.ndnsports.com/AIAHOF/main.htm.