Prague, Czech Republic — She's a big personality from a country where Gypsies are persona non grata.

Vera Bila belts out her trademark fusion of Gypsy music laced with Latin, jazz and pop influences to sellout crowds in 20 countries. She's got a new album that's been released across Europe and in Israel, and is to debut soon in the United States. 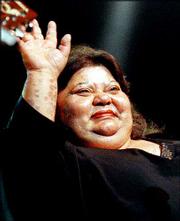 Roma singer Vera Bila waves to the audience during a concert in Prague, Czech Republic. Bila's music is largely ignored in her homeland, but she plays to sellout crowds in other countries.

But Bila, 47, can't catch a break in her homeland, where Gypsies are an embattled minority. She gives about 100 concerts a year abroad, yet only about five gigs back in the Czech Republic.

"People should be proud of what she achieved, but they just ignore her," said Jiri Smetana, a producer who helped discover Bila for international audiences. "Radio stations here don't want to play Gypsy music. Who knows why?"

Bila says she is used to Czech coolness, and the plight of her people ï¿½ who are also known as Roma ï¿½ inspires much of her music.

"I sing what I feel. It's my life in the songs," she said in an interview. "When you open your heart, people can understand."

Born into a musical family in 1954, Bila started singing at the age of 7. Under her father's strict guidance, she played piano, violin and cimbalom.

She said she taught herself the guitar secretly, since it didn't fit with her father's traditional tastes.

"He destroyed my radio to prevent me from listening to anything other than traditional Gypsy songs," she recalled.

It didn't work. Still, Bila and her band Kale ("Blacks" in English) go heavy on Gypsy themes on their latest album, "Rovana" ("I Will Cry"), and the music has unmistakably Roma roots.

In 2000, Bila played the World of Music and Dance festival in Seattle and was joined onstage by Bonnie Raitt. Riding an emotional high, Bila and her band returned to their hometown of Rokycany, 55 miles southwest of Prague, only to have the staff at a local restaurant refuse to serve them.

A new song, "Tekerel" ("What to Do?"), captures her anguish: "What are they supposed to do now, if they can't go anywhere? When they come back home, they have tears in their eyes."

The French have dubbed Bila, who sings in Roma, the Ella Fitzgerald of Gypsy music; she's known in Germany as the Queen of Romany for an influential 1999 album. In November, during a sold-out tour of Israel, the mayor of Tel Aviv invited Bila to lunch and presented her with pearl-studded gold earrings.

Bila isn't accustomed to such treatment in the Czech Republic, home to 250,000 Gypsies, many of whom complain of discrimination, face racially motivated attacks and struggle to make ends meet amid 70 percent joblessness.

Although many Czechs accuse Gypsies of being criminals, the country has been criticized repeatedly by human rights organizations at home and abroad for alleged discrimination against Roma.

Czech media play a role in perpetuating stereotypes about Gypsies that help keep them unpopular and make it difficult for Gypsy bands to win a wider audience at home, said Petr Doruzka, a specialist in world music.

But Bila is reluctant to criticize her homeland, preferring to let her music speak for itself.

"I don't want to stain the country's reputation," she said. "It is my country; I was born here and that's where I belong."