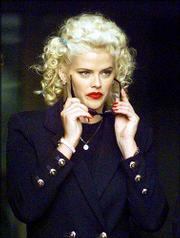 Anna Nicole Smith leaves a federal courthouse in Los Angeles in this Oct. 27, 1999, file photo. A federal judge ruled Thursday that the former Playboy Playmate is entitled to more than $88 million in damages stemming from a case involving the estate of her late husband, Texas oil tycoon J. Howard Marshall II.

"The evidence of willfulness, maliciousness and fraud is overwhelming," Carter wrote.

He found that E. Pierce Marshall and others spied on the couple and controlled his father's access to money to deny Smith the sums she was promised.

E. Pierce Marshall released a statement saying he would appeal and that his father "would be appalled that the district court continued to ignore his clearly stated wishes."

Smith, 33, has fought lengthy court battles in California and Texas over the fortune of her late husband, who died at age 90 in August 1995, 14 months after they wed.

The former Playboy Playmate, whose real name is Vickie Lynn Marshall, met her husband in 1991 when she was working as a stripper. The couple married three years later when she was 26 and he was 89.

Before his death, his estate went into a trust that divided his fortune among charities, a foundation, his son and other individuals, but gave nothing to Smith. She sued E. Pierce Marshall to get part of it.

"J. Howard made numerous promises to Vickie that she would receive half of what he owned," Carter said in his ruling.

He said Smith was entitled to $44.3 million in punitive damages and the same in compensatory damages against E. Pierce Marshall, who controls the trust created by his father.

"This is a complete victory for my client, and I think it's a victory for a husband's love for his wife," said Smith's attorney, Philip Boesch.

He said his client "was subjected to the worst kind of legal maneuvering by her son-in-law."

Marshall and Smith were absent when the ruling was issued.

A year ago, a Texas jury concluded Smith had no right to any money.