Boston — First, Doris Kearns Goodwin wrote books, employing her extraordinary level of access to presidents and their papers. Then she proved to be a remarkably entertaining guest on TV.

The rest, as they say, is history. 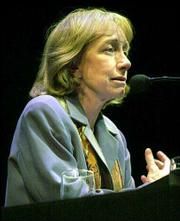 Historian Doris Kearns Goodwin speaks at the College of St. Catherine in St. Paul, Minn. In one of her first speeches since she admitted in January that some portions of her 1987 book about the Kennedys were copied from other sources, Goodwin said Thursday she had dealt fairly and openly with the mistake.

Suddenly, Goodwin's wide smile and pithy anecdotes were everywhere on television. She rhapsodized about the national pastime on the 1994 PBS documentary "Baseball" and became a mainstay on the pundit circuit, weighing in on everything from the death of John F. Kennedy Jr. to the Clinton scandals.

But now the Pulitzer Prize-winning historian has become the subject of the talking-head panels she once sat on.

She has joined the growing ranks of historians whose credibility has come under attack, admitting she lifted from other authors' works without attribution in her 1987 book "The Fitzgeralds and the Kennedys."

Since then, universities have canceled speaking engagements. Her publisher is destroying remaining paperback copies of the book. Her regular appearances on "NewsHour with Jim Lehrer" have ceased. And this week the Pulitzer Board announced Goodwin has withdrawn from the judging of journalism's most prestigious prizes.

The 59-year-old author, who lives in Concord, has denied she intentionally plagiarized but acknowledged "there were sentences that should have been in quotes." She predicted Thursday that her openness about her "sloppiness" would ultimately quell the storm that has arisen in recent weeks.

The credibility of several other best-selling historians also has come under scrutiny recently. Joseph Ellis, who won a Pulitzer for "Founding Brothers," admitted lying to his Mount Holyoke students about serving in Vietnam. David McCullough said he misquoted Thomas Jefferson in "John Adams," and at least five books by Stephen Ambrose have been cited for material lifted from other sources.

The Weekly Standard first revealed Goodwin's transgressions in a January article about a 15-year-old confidential monetary settlement between Goodwin and British author Lynne McTaggart. McTaggart had complained that several passages in Goodwin's book were nearly identical to parts of her 1983 book on Kathleen Kennedy.

Goodwin explained that in her handwritten notes for the book, passages from other books were intertwined with her own observations. She said she has since begun to use scanners to copy pages from books.

In February, Goodwin admitted that her borrowing was far more extensive, and that her researchers had found scores of additional quotations and paraphrases in the Kennedy book that came from other authors. She also announced Simon & Schuster's plan to destroy copies of the book and reissue a corrected version.

Soon after, the University of Delaware withdrew an invitation for her to speak at its commencement, and James Madison University canceled a March 15 appearance.

Goodwin remains on the Northwest Airlines board and the 30-member Harvard Board of Overseers, whose function is to "encourage the university to maintain the highest attainable standards as a place of learning."

"I don't believe in involuntary plagiarism," said Roy Peter Clark, senior scholar at the Poynter Institute journalism school and author of an essay on plagiarism called "The Unoriginal Sin." "We know that something serious happened."

Goodwin had just begun a 10-year stint as a Harvard professor in 1968 when she became a White House fellow for the final months of Lyndon B. Johnson's presidency. She later helped him write his memoirs and then wrote the acclaimed biography "Lyndon Johnson and the American Dream," published in 1976.

Later, Goodwin's best-selling 1994 book about Franklin and Eleanor Roosevelt, "No Ordinary Time," won her the Pulitzer.