It takes the darnedest pictures. Sometimes it creates pastel auras or adds symmetrical streaks the color of rainbows. Sometimes drips or blobs of color will magically appear that change a well-composed snapshot into art.

Until last August ï¿½ when he fished his camera and tripod from the bottom of a New Mexico pond ï¿½ Eaves owned an ordinary Nikon Coolpix 990 digital camera.


To see more of Farrell Eaves' photos, go to Bruce Dale's Web site at:www.brucedale.comand click on the photo of Dale with a bear sitting on his back. Then go to the upper left corner of the next page and click on "New!! Mr. Eaves and his Magic Camera"If you have questions for Farrell Eaves, e-mail him at ffeaves@worldnet.att.net

"I was just heartsick when the camera went into the water," Eaves said in his soft Tennessee twang. "The door on the end of the camera popped open, the flashcard (which stores the recorded images in the camera) came out, so everything filled up with pond water."

After retrieving his gear he wiped it off, as best he could, with his handkerchief. In minutes the camera's lens, viewfinder, monitor and flash lens were clouded over.

His $800 Nikon sloshed when he shook it.

Back in Pecos, Dale helped Eaves in his attempts to dry his camera. After spending 30 years as a staff photographer for National Geographic, Dale has plenty of experience with wet cameras ï¿½ but not the digital variety.

A horse in a surreal trailer.

For three days they blew out the camera with bottled air in the morning, baked it in the August sun during the day and left it sitting above the pilot light on a gas stove at night.

While making his last swing through New Mexico before heading back to Tennessee, Eaves tied his still-foggy camera to the windshield wiper of his car ï¿½ he has witnesses. He drove that way for two days hoping the wind and sunshine would do the trick.

"I wasn't sure it was doing any good, but I got a lot of funny looks and made a lot of people smile whenever I parked," Eaves said.

After five days of trying everything but mouth-to-mouth resuscitation, the lens and viewfinders cleared. He popped in four new batteries, slid the once-wet Sandisk flashcard into place and turned the camera on.

"It fired up like it knew where it was going," the excited former Korean War photographer said.

But when he looked at his Coolpix monitor, the colors were streaked, halos magically appeared, and every time he moved the camera the colors would change. When he photographed a subject, no two photos were alike.

"This is like someone handing you a camera before the first-ever picture was taken. You have no idea what the light will do and it's the same light that Moses read the Ten Commandments by," Eaves said almost reverently. 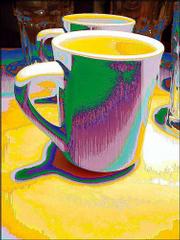 As the retired safety engineer says, everything the camera sees is real ï¿½ it only interprets things differently. Realism is out the window, or out of his camera anyway.

"It's been wonderful what it's done to spiritually related images, like altar vestments and interior shots of our Methodist church," Eaves said, adding that the camera doesn't work well in bright light or with the flash.

Eaves drove through Kansas last summer on his return trip to Tennessee.

"I had a tough time making any headway because I stopped so many times to take photographs in Kansas," he said.

He also volunteered to bring his magic Coolpix to Lawrence to "take as many pictures as you want ï¿½ you just let me know."

Well, we've invited him and we'll let you know when he's coming.

The Kansas sky streaks behind an old tree in subtle colors along U.S. Highway 56 in the western part of the state. 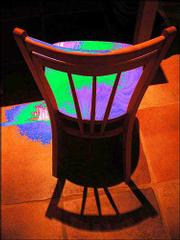 A chair illuminated by one light 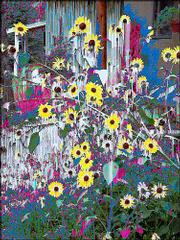 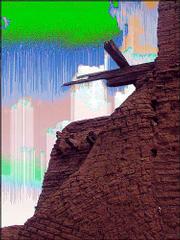