New York — Irene Worth, the elegant, three-time Tony-winning actress in such plays as "Tiny Alice," "Sweet Bird of Youth" and "Lost in Yonkers" and whose many classical roles ranged from the Greeks to Shakespeare to Chekhov and Shaw, has died. She was 85.

Worth died Sunday of a stroke, said her sister, Carol Johnson of Santa Monica, Calif. 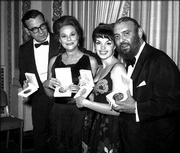 Actress Irene Worth stands with other Tony Award winners in this 1965 file photo. From left are Walter Matthau, Worth, Liza Minnelli and Zero Mostel. Worth died Sunday of a stroke.

The actress, known for her distinct voice and patrician manner, worked extensively in theater on both sides of the Atlantic, appearing on Broadway, in London's West End and with such companies as the Old Vic, the Royal Shakespeare Company, the National Theatre of Great Britain and Canada's Stratford Festival.

Worth received her first Tony for best actress in 1965 for playing the wealthiest woman in the world, the mysterious title character in Edward Albee's "Tiny Alice."

"She had a beauty and a uniqueness, especially when she spoke," said actress Marian Seldes, who was Worth's standby in "Tiny Alice." "The timbre of her voice was like a musical instrument, a cello perhaps, and because it was so beautiful, you remembered what she said. That's why playwrights liked her."

Worth received her second best-actress prize in 1976 for her portrayal of an aging but still glamorous movie star in a memorable revival of Tennessee Williams' "Sweet Bird of Youth," appearing in the play opposite a young Christopher Walken.

Her third Tony, this time in the featured-actress category, came in 1991 for "Lost in Yonkers," as the distant, domineering mother in Neil Simon's Pulitzer Prize-winning play. She repeated her role in the 1993 film version. Simon called Worth "an extraordinary actress, certainly one of the finest I've ever worked with."