ABC does damage control with Koppel

Walt Disney Co. chief executive Michael Eisner phoned Koppel and the two had a "warm, friendly" conversation, according to an ABC employee who spoke on condition of anonymity. 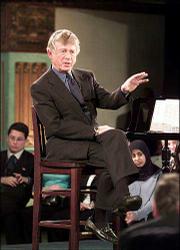 Ted Koppel plays host to a Nightline town meeting, "Homeland Security: At Any Cost," at the Elmhurst Elks Lodge in the Queens Borough of New York City. The show took place Friday. Since learning this week that David Letterman will remain at CBS, ABC officials are trying to placate Koppel and other ABC news staffers.

On Monday Koppel said ABC's efforts to install Letterman in the time slot held by "Nightline" for 22 years had caused "collateral damage" to the show. And although ABC executives said "Nightline" will stay put, Koppel said he wanted more than "bland assurances or short-term guarantees" about its future.

He wanted a clear signal to everyone, including "loyal viewers interested in the robust future of network television news," that Disney was behind his show.

The future of "Nightline" is being closely watched among journalists for signals about how news is valued in an era when the major networks are small parts of conglomerates ï¿½ ABC in Disney, CBS in Viacom and NBC in General Electric.

"If you can take a genuine broadcast news institution that is regarded very, very highly and is profitable and treat it this way, then I think it reflects a value system that bodes very bad things to come for broadcast news," said Alex Jones, director of the Shorenstein Center for Press, Politics and Public Policy at Harvard University.

Some in TV news suggest that their most revered institutions ï¿½ the evening news broadcasts ï¿½ could be in trouble once current anchormen Tom Brokaw, Peter Jennings or Dan Rather step away because of years of declining ratings.

"They are very sensitive to bad publicity," he said.

ABC executives said "Nightline" would still have a place somewhere on ABC even if Letterman had jumped. They continue to believe they made the right move in going after Letterman.

ABC President Alex Wallau said the network's commitment to news was obvious in the days after Sept. 11, and during the round-the-clock millennium coverage.

"We think at the end of the day, that support will be recognized," Wallau said.

But there were no promises of an unlimited late-night time slot for "Nightline." Disney and ABC officials would not comment publicly on Koppel's statement.

The company "would look at a high quality program with superior economics" as an alternative to "Nightline," he said.

While he doesn't want to diminish the news division's contributions, Iger said he and Eisner "have to operate with the company as a whole in mind. That often means making decisions that benefit one entity in the company to the detriment of others."

An ABC staff member said that Westin promised, in a phone call to ABC News employees on Tuesday, to work hard to ensure the company fully understands the value of news.