After 20 years of quirky behavior, They Might Be Giants is being embraced by the mainstream

One wears glasses, the other wears an accordion.

Both share singing chores and songwriting duties with equal fervor. But for John Linnell and John Flansburgh, the founding duo behind the oddball rock act They Might Be Giants, there is one surefire way to tell them apart. 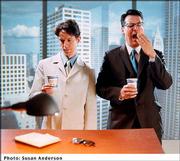 John Linnell, left, and John Flansburgh formed They Might Be Giants while in high school.

"Our voices are similar, but I've got the more irritating nasal voice," said Linnell, who is up bright and early while his partner in musical crime is still sleeping after a late-night Texas gig. "It's probably the easiest way to distinguish our voices. He has a more round tone. On the new album, 'Mink Car,' he's doing the more pleasant vocals. I do the more unpleasant stuff."

The band just finished performing at the South By Southwest Music Festival in Austin, Tex., where the occasion was marked by more than just another sold-out show. It also served as the opportunity to unveil "Gigantic (A Tale of Two Johns)," a documentary feature about They Might Be Giants.

"There's nothing really special about me and John personally; we're just a couple of guys," Linnell explained. "A.J. (Schnack, filmmaker) kind of appreciated the fact that our work is the thing that's actually interesting, and our personalities are sort of incidental."

While Flansburgh has taken over the directing reins on previous Giants videos, as well as others by Ben Folds Five, Harvey Danger and Frank Black, the pair felt that engaging someone within the band to attempt a self-documentary might have been awkward.

"The great thing about having somebody else do it was they were free to indulge," he said. "There's a lot of very oddball information. Like the filmmakers went to our hometown (Lincoln, Mass., where the two started to collaborate during high school) and had one of the local dignitaries in this little community declare the documentary 'open' by snipping a little piece of red tape. It's like he was opening a bridge or something."

While the picture may never win an Oscar, stranger things have happened to the Giants. After all, just a few weeks back they were the unlikely recipient of a Grammy. The pair picked up a statuette in the category of Best Song Written for a Movie, TV or Other Visual Media for their work on "Boss of Me," the insidiously hooky theme to the celebrated sitcom "Malcolm in the Middle."

The duo was recruited to create the song by the show's executive producer Linwood Boomer. ("At the time we thought some crank was calling up," Linnell remembered. "We thought, 'Who is this guy? And what kind of name is Linwood Boomer?'") Flansburgh had already written a tune with the chorus "You're not the boss of me now," which he envisioned would work well for "Malcolm." Then when he asked Boomer to sum up the show in a nutshell, the TV producer replied, "Life is unfair." That description ended up as the song's concluding lyric.

"It struck us when the show debuted that it was a little bit more transgressive than most sitcoms, so we thought it was not going to do so well," Linnell said. "But it's led to other songs (including themes for TV's "The Oblongs," ABC's "Nightline Primetime: Brave New World" and the current film "Return to Neverland.") We had a hit with the song internationally. And we got a Grammy nomination out of it. So everything about it has been dumbfoundingly great."

As for the actual Grammy ceremonies, Linnell revealed that the event was "an excruciatingly normal thing."

"At the time, it became obvious that we weren't going to win," the 42-year-old musician explained. "And we were sitting in this row that was kind of toward the aisle on the outer edge of the floor. So John and I had this discussion, 'If they call our name, which way would we walk? Do we go up the outside or do we cross through the whole row and go up the middle?' Then we were saying, 'What are we even talking about? I guess we'll probably just sit here and clap when whoever wins actually wins.'"

When the victor was announced, the pair opted to approach the podium from the middle ï¿½ perhaps in a tribute to Malcolm.

"But also we're trying to figure out why we got this Grammy because it seems incredibly unlikely that we'd win," he said. "I think one of the reasons is that people voting actually knew the song. They may have never heard of us ï¿½ and obviously had heard of Sting and Faith Hill ï¿½ but they knew our song better."

After this current tour, They Might Be Giants will finish up a children's CD-ROM called "No!" ("It's like psychedelia for kids," he described.) And the band plans to release "Dial-A-Song: An Anthology" in August. The double-disc compilation will celebrate two decades of the act's material which, prior to a recording contract, began by placing demo songs on the venerable answering machine service ï¿½ which is still dispensing their tunes at (718) 387-6962.

"One of the nice things about what we do is we don't have to define what we're doing," Linnell added. "We don't even really know what it is."