New York — It sounds like the setup to a bad joke: How many people does it take to put together an Oscar outfit?

About a half-dozen, or more. 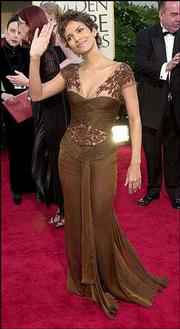 Valentino gowns, like the one shown here, have been good to actress Halle Berry, and she's likely to stick with him for a beautiful dress that is somehow both sophisticated and girlie at this year's Oscars.

But that's not a punch line ï¿½ it's a Hollywood reality.

Take a best-actress nominee, who has a manager, publicist and stylist, all of whom have an idea about what "the dress" should look like. It's the stylist's job to contact a designer's publicist, or several designers' publicists, to get the designer on board.

"I call it the Oscar sweepstakes," says designer Vera Wang. "If I'm interested in dressing someone, I will contact her. But she has to match my look."

Once the dress is selected, the stylist also coordinates the rest of the ensemble, sometimes down to the star's undergarments.

The frenzy in the days leading up to the Oscar ceremony March 24 in Hollywood is part of a calculated marketing effort that most fashion and luxury companies buy into and feed off of, says Tom Julian, fashion commentator for Oscar.com, the Academy of Motion Picture Arts and Sciences' Web site.

Some of this year's nominees, however, have well-documented style preferences that will make it harder for an outside company to infiltrate their fashion camps.

"Nicole Kidman will do the drop-dead glamour thing," predicts Julian.

She's known to be a stylemaker and favors European designers who offer cutting-edge designs.

Renee Zellweger, considered a fashion winner at last year's Oscars in a vintage yellow gown, might look to a British designer in a nod to her alter ego in "Bridget Jones's Diary."

Valentino gowns have been good to Halle Berry, and she's likely to stick with him for a beautiful dress that is somehow both sophisticated and girlie.

Jennifer Connelly might be the "get" for a designer this year because she's without a known allegiance to a designer or even a particular style. She's also a chic minimalist New Yorker who wants to be known more as an actress than the best-dressed belle of the ball.