Beverly Hills, Calif. — God, according to that noted expert on the deity, Carl Reiner, hates talking to anyone wearing a tongue ring.

Actually, it's Reiner who hates talking to anyone wearing a tongue ring. But that's the point. Since we are created in God's image, he must be a lot like us, Reiner reasons. 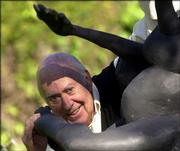 Carl Reiner, an actor, director, writer and comedian who has won 12 Emmy Awards, turns 80 on Wednesday. Far from retiring, he is hard at work, appearing in movies and on TV and recordings the works of author Mark Twain.

God, by the way, also hates it that comedies never win Oscars.

Reiner's musings on The Almighty, published in his 1999 book, "How Paul Robeson Saved My Life and Other Mostly Happy Stories," strike the same skeptical, irreverent tone often employed by his favorite author, Mark Twain.

But only one award is on display in the living room of his Beverly Hills home ï¿½ the Kennedy Center's Mark Twain prize for American Humor, which he received in 2000.

"I want it out where I can see it," Reiner says. "I always felt a little bad about receiving it. There are many more great scholars of Mark Twain than me. I just love him."

Reiner, who will turn 80 on Wednesday, is known as a television writer, actor, film director and author. Far from retiring, he is hard at work, appearing in the recent Warner Bros. film "Ocean's Eleven" and landing a recurring role on an upcoming CBS television series, "Baby Bob."

He also is involved in an ambitious new project: recording all of Twain's writings.

He has done four books on tape so far. The latest, "Letters From the Earth," published by New Millennium Audio, was nominated for a Grammy this year. The second book, "The Prince and the Pauper," was nominated in 1996.

Reiner got hooked on Twain in 1950, when, as a 28-year-old writer on Sid Caesar's "Your Show of Shows," he first read "A Connecticut Yankee in King Arthur's Court."

"I came to the office and I said, 'Did you guys ever read this?' Of course, they had all read it. I was a bore about it."

Years later, Reiner received a signed edition of Twain's works from the television show, "This Is Your Life." Then came Hal Holbrook's one-man show, which brought the cigar-smoking, mustachioed monologist to life. Reiner took his two children, then ages 8 and 10, to see Holbrook perform in New York.

"We went to that theater and I was transported back in time," Reiner says. "We were sitting in the second row when Holbrook came out. I sat there with my mouth open. It was mesmerizing."

Reiner also became attracted to Twain's lesser-known works, including "What Is Man?" and "Letters From the Earth ï¿½ Uncensored Writings by Mark Twain." In these books, Twain expressed a disdain for organized religion, poked unmerciful fun at mankind's inflated ego and marveled at how man could kill in the name of God.

The philosophy struck Reiner as being very close to his own.

"If you have a sense of humor, you have to question everything," Reiner says. "Everything seems funny to you. Look at all of the accouterments and vestments of very religious people. Who decided they should have the hat that goes this way and that? It's theater.

"Take everybody's clothes off and you couldn't tell the prelate from the peasant. All of this is to be discussed and noticed."

If humor serves to note the emperor's nakedness, it also can be a balm in times of tragedy. "Man, when he's not in total pain, when he's reflective of where he is after he's been bandaged, will always find a way to lighten his own load by finding something humorous," Reiner says.

Twain himself wrote with biting humor even as he suffered through crippling financial troubles and the death of his wife and several of his children.

In "Letters From the Earth," Reiner gives voice to several characters, most notably God and Satan. In the first part of the book, Satan roams the Earth, sending back letters to his fellow archangels as he marvels at man's foolishness.

Performing the book reminded Reiner of his early days in radio, except that this time, he played all the characters. He gives God a booming, stentorian voice. He plays Satan with a lighter touch.

"Satan sounded to me like a playful guy," Reiner says. "George Sanders would probably play him in the movies. Too bad I didn't think of George Sanders; I probably would have imitated him."

Reiner is working on two more Twain books, "Travels Abroad," and one of Twain's favorites, "Personal Recollections of Joan of Arc."

"He brings life to them nobody else can bring," says Michael Viner, president of New Millennium Audio. "You can make a strong argument that the best person playing Twain is Hal Holbrook, but playing Twain's characters is Carl Reiner."