Forget the Emmys, the Grammys or ï¿½ gack ï¿½ the Golden Globes. The Oscars represent the lone awards show that actually means something.

It means box-office. It means clout. It means credibility ï¿½ when noted movie stars die, the first words before their name are inescapably "Oscar-winning actor ..."

And this year there is one other word that the event will mean: suspense.

At the 74th Annual Academy Awards on Sunday, viewers and participants should be treated to a contest that is still up for grabs in most of the marquee categories. There are very few "sure things" to be expected from the ceremony, aside from overpriced outfits and heightened security.

What a difference a month makes.

When the nominations were announced Feb. 12, it was a foregone conclusion that bad-boy Russell Crowe would join Tom Hanks and Spencer Tracy as the only back-to-back Best Actor winners. But Crowe's performance as schizophrenic mathematician John Nash Jr. in "A Beautiful Mind" ï¿½ superior work to that of "Gladiator ï¿½ is currently the subject of controversy. Allegations that the movie glossed over Nash's involvement with infidelity, homosexuality and anti-Semitism have tainted what was supposed to be an inspirational character.

Of course there also are claims that it's all part of a massive smear campaign by rival studios to thwart the chances of "A Beautiful Mind" as a contender. Even though the Nash criticism is inappropriate (though not necessarily untrue), Crowe is unfortunately a victim of it.

Will Smith made a fine impression as the titular character in "Ali," but even his undeniable charisma couldn't revive this meandering, sullen mess of a biopic. Sean Penn as the mentally challenged father in "I Am Sam" and Tom Wilkinson as the grieving father of "In the Bedroom" are long shots in this category, despite the fact that Wilkinson probably gave the best performance of the year.

Enter Denzel Washington, who took the role of an ambiguous cop in a routine crime drama and turned it into something memorable. Sure "Training Day" devolved into a ridiculous shoot-em-up in the third act, but for the first hour or so, Washington was riveting as above-the-law Det. Alonzo Harris. This award will represent cosmic retribution for a decade prior when Washington lost for his A-list breakthrough in "Malcolm X" to Al Pacino in "Scent of a Woman."

Sissy Spacek is one of America's finest actresses. Although a five-time nominee whose standouts include "Coal Miner's Daughter" and "Carrie," she hasn't had a truly juicy part in decades. As a bitter mother whose marriage is put in jeopardy after a family tragedy, her "In the Bedroom" showcase served to refortify her reputation. It's no wonder Spacek is considered the best bet by Vegas oddsmakers. Still, it's a dreary, depressing role in a very slow movie. (I've met no one other than East Coast critics who "loved" this picture.) And because of the overall impression the film leaves the viewer with, the door is open for other showier portrayals to sneak in.

Both Judi Dench and Nicole Kidman got to play interesting women with fatal diseases. But Dench's turn as Alzheimer's-afflicted writer Iris Murdoch seemed old hat compared with the superior nominations of this collective. Kidman could gain sympathy for injuring herself during the filming of "Moulin Rouge" ï¿½ a wound that caused her to drop out of the upcoming "Panic Room." And her fine work in the gothic horror flick "The Others" ï¿½ for which she took home the prize for Best Actress at our Kansas City Film Critics Circle gathering ï¿½ provided her with even more validity. She also learned how to sing for the role. Kidman has a real chance of winning, even if most of her performance could be attributed to the film's editor.

Renï¿½e Zellweger was a hoot as the frumpy title character of "Bridget Jones's Diary." She's one of the few young actresses in Hollywood who would allow herself to appear so unflatteringly (hair, makeup, clothing, weight gain) throughout an entire movie. But comedy is rarely rewarded in a leading category.

The most courageous female performance of 2001 was by Halle Berry in "Monster's Ball." As the wife of an executed inmate who falls in love with a prison guard, she provided an unsympathetic character (she often beats her kid) who is eventually redeemed. Berry had to suffer through a daring sex scene, a drunk scene, violent outbursts, crying, despair ï¿½ she was a virtual Oscar highlights reel. The underdog just picked up the Screen Actors Guild award, so maybe her fellow thespians are actually paying attention.

It's tempting to conjure up the memory of Bill Murray's smarmy Hollywood personage when he used to run down Oscar predictions on "Saturday Night Live." He'd point to a board with the supporting nominees, then wipe it clean while quipping, "Yeah, who really cares."

But it's these slots that always provide the most surprises. In fact, during the past decade there hasn't been a single year when both supporting winners were the odds-on favorites.

As the moral young cop in "Training Day," Ethan Hawke was unquestionably the lead actor. Once again, the whole "let's campaign for someone in a lesser category so they'll get nominated" approach worked. But it still doesn't disguise the fact that this was an ordinary performance that dozens of other pretty-boys could have stepped in and rendered. 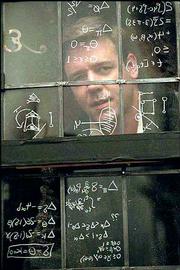 Both Jim Broadbent ("Iris") and Jon Voight ("Ali") portrayed real-life characters in period pieces. Despite good work, their efforts were in pictures that received mixed reviews. Voters tend to reward films they like more than performances they like.

Ben Kingsley was wonderfully malicious as the pit-bull mobster in the European heist flick "Sexy Beast" ï¿½ a depiction he claims is based on his grandmother. By providing a dominating presence to a movie that would fall apart without him, Kingsley deserves to triumph in this category, and he at least has the second-best shot at it.

As wizened wizard Gandalf the Grey, fellow British actor Ian McKellen was pivotal to the success of "The Fellowship of the Ring." He's responsible for providing exposition, humor and the film's most dramatic moment. Hollywood recognizes that McKellen has proven himself equally comfortable in art films ("Gods and Monsters") and mainstream action franchises ("X-Men"). He's a respectable, classy choice for rewarding the year's most-nominated film with a victory in a non-technical category.

Best Supporting Actor: (50 percent certain) Ian McKellen for "The Lord of the Rings: The Fellowship of the Ring."

In eight years of publishing Academy Awards predictions, I've only gotten the Supporting Actress category right twice. (Three times it prevented me from a perfect sweep.) Traditionally, it's been the one that proves my fallibility and screws up the rest of the world's Oscar pool standings. This year all that will change ï¿½ a type of assumption that will probably ensure that I get this category right and all the others wrong.

Jennifer Connelly became something of a household name in 2001, despite a long career that has progressed from junior-high phenom ("Labyrinth") to pin-up sex symbol ("The Hot Spot") to respected indie thespian ("Requiem for a Dream"). Connelly was ideal as Alicia Nash in "A Beautiful Mind" (which some view as a leading part). As I wrote in my original review, "This is no typical 'long-suffering wife' throwaway. Connelly reveals the anger, frustration and ï¿½ most importantly ï¿½ FEAR involved with watching a loved one come unglued."

The Lord of the Rings: The Fellowship of the ring

The lean roles of Kate Winslet ("Iris") and Helen Mirren ("Gosford Park") seem overmatched in this category. And despite probably her best performance as an aging seductress with ex-husband problems, Marisa Tomei's "In the Bedroom" turn was overshadowed by her leading co-stars. The venerable Maggie Smith was hilarious as the snobbish countess in "Gosford Park" ï¿½ she's the standout in a densely talented ensemble ï¿½ and if there is any chance of an upset it will be because of her.

But this is Connelly's year, and she deserves it.

Two of the last three winners in the Best Director category have gone to filmmakers whose pictures ended up losing. In keeping with this trend, I feel a major upset brewing. Ron Howard ("A Beautiful Mind") and Peter Jackson ("The Fellowship of the Ring") seem the most likely recipients. Ridley Scott ("Black Hawk Down") and David Lynch ("Mulholland Drive") have no chance. But the sole Kansas City native in the bunch is poised to pull a stunner. The 77-year-old Robert Altman ("Gosford Park") helmed the most satisfying project of his later career, and one that's truly a "director's film." He has also been nominated a total of five times without a win, and the Academy may find this event the perfect occasion to honor him. It's better to do it now than posthumously.

Three films have a legitimate shot in the Best Picture race ï¿½ two more than usual this late in the game. "In the Bedroom" and "Gosford Park" are out. The lowest-grossing nominee never wins, and both these art-house productions only hauled in around $30 million. However, frontrunners "A Beautiful Mind" and "The Fellowship of the Ring" and dark horse "Moulin Rouge" have many things in their favor.

According to the highly influential Internet Movie Database, all three of these pictures are currently rated in the all-time top 150 films by readers/web surfers. ("Ring" is actually at No. 2 behind only "The Godfather.") So clearly these movies made an emotional impression on critics and the general public.

Both "Ring" and "Moulin Rouge" were considered audacious, monumental undertakings that stemmed from the clear vision of a respected filmmaker. They pounded their way into pop culture, whether through plastic action figures or diva-laden soundtracks. And while it may not be politically correct to say so, there's a pervasive sense in the industry that "Ring" will get the geek vote and "Moulin Rouge" will get the gay vote ï¿½ both a significant demographic among the Academy.

However, there are a few things to consider:

ï¿½ A fantasy film has never earned a Best Picture Oscar. (Minus for "Ring.")

ï¿½ Only twice in the ceremony's history has a film won without a Best Director nomination. (Minus for "Moulin Rouge.")

ï¿½ Eight of the last 10 Best Picture winners grossed more than $100 million on first run. (Minus for "Moulin Rouge.")

ï¿½ A movie without a screenplay nomination hasn't won the final award in decades. (Minus for "Moulin Rouge.")

ï¿½ Only four of the last 20 Best Picture winners have not had a Best Actor or Actress nomination. (Minus for "Ring.")

Also, there's the sense that as good as "Ring" is, the next two installments of the J.R.R. Tolkein trilogy are going to be even more impressive. Voters may not want to reward an initial film that might potentially be the weakest in the series.

Despite all the bad press about its temperamental star Crowe ï¿½ which certainly didn't hurt the chances of "Gladiator" last year ï¿½ and criticism about the authenticity of the film, there's no tangible reason to prevent "A Beautiful Mind" from emerging victorious. It's the most feel-good nomination of the bunch, while maintaining enough of an artistic veneer to convince voters that they are rewarding a truly deserving effort. And come on, it had the year's coolest plot twist. Believe in the power of the "Mind."