Now all, apparently, is forgiven. 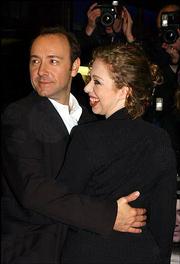 Chelsea Clinton walks with actor Kevin Spacey at "The Shipping News" preview in London. Not long ago, Clinton said she was feeling homesick and finding the English to be anti-American, but she now seems to have joined London's celebrity circuit.

Sporting a sleek new hairstyle and stylish clothes, the former first daughter has joined London's celebrity circuit, with sightings reported at the city's hottest hangouts. She has been voted the fifth most eligible woman in Britain, and her reported romance with another American student has spawned a new glamour couple.

"People don't want to stay geeky forever," said Mark Frith, editor of the celebrity magazine Heat. "Her confidence is obviously growing, and I think she wants to give herself a new start and a new look.

"She's gone from being this gawky kid to someone who's quite happy to be very exposed, sitting in the front row at fashion shows," he added.

Clinton, 22, is in the second term of a two-year graduate degree course in international relations at Oxford, where her father was a Rhodes Scholar from 1968 to 1970.

The first few months were not easy. In November, newspapers in Oxford reported that Clinton was among a group of American students who heckled a meeting protesting the war in Afghanistan.

In an article for the magazine Talk, Clinton wrote that it was "hard to be abroad" in the months after the Sept. 11 terrorist attacks.

"Every day I encounter some sort of anti-American feeling," she wrote.

"Over the summer I thought I would seek out non-Americans as friends, just for diversity's sake," she added. "Now I find that I want to be around Americans ï¿½ people who I know are thinking about our country as much as I am."

The comments generated some unsympathetic responses from Clinton's temporary home.

The Oxford student newspaper accused Clinton of using "her fame to propagate her views."

"Shame on you, Chelsea," wrote Jonathan Farley, an American academic at Oxford, in a letter to The Guardian newspaper.

"So Chelsea Clinton's surrounding herself with sympathetic Americans at Oxford? Isn't she supposed to be studying international relations?" asked another Guardian letter-writer.

But, as the year ended, Clinton and Britain began to warm to one another.

In January, she attended a Paris fashion show, sporting a silken bob and slinky black dress. She sat in the front row for the Versace show, alongside Madonna and Gwyneth Paltrow.

The response was dramatic.

"Gone are the tidy checks and polka dots, the caterpillar eyebrows and the straw hats," wrote Emma Brockes in The Guardian newspaper. "Gone, most significantly, are the ringlets. In their place are a black Versace trouser suit, vampish, Sophia Loren eyeliner and a bob of fanatically flattened hair."

Since then, Brockes wrote, Chelsea Clinton "has been prominent on a circuit she used actively to avoid."

Clinton graduated in June 2001 from Stanford University in California with a history degree. During her four years at Stanford, she lived a relatively typical student life ï¿½ studying in the library, cheering at basketball games and working out at the gym.

At Oxford, she has had to contend with Britain's robust tabloid press. In January, one Oxford college, Trinity, passed a resolution condemning any student who revealed information about another to the press.

The proposer of the motion, Graham Webber, said there had been "bad rumblings" that students had sold stories about Clinton's private life to the media, according to Cherwell, the student newspaper.

The new-look Chelsea doesn't need informers to make the news, however. She has been spotted at film premieres, theater openings and in London's trendiest nightspots ï¿½ The Ivy restaurant and the Met Bar; the Chinawhite and Stork Rooms clubs. With her father, former President Clinton, and Bono from U2, she hung out at the Groucho, a private club for the media elite. The Daily Telegraph reported that the trio "wobbled out" at 3 a.m.

In February, Chelsea Clinton attended the London premiere of "The Shipping News," signing autographs and chatting to fans alongside stars Kevin Spacey ï¿½ an old friend ï¿½ and Judi Dench.

She was accompanied by Ian Klaus, a history and literature graduate of Washington University in St. Louis who is now a Rhodes Scholar at Oxford. Pictures of the two laughing together and reports of their intimate dinners at restaurants in London and Oxford have provided further fodder for the tabloids.

There has already been a backlash, with unsubstantiated reports recently suggesting the 900-year-old university was displeased with Clinton's party-girl reputation.

Oxford would not comment. Several newspapers have quoted Clinton as saying she spends most of her time studying.

"A lot of people can get lost in show biz, and it may happen that she accepts too many invitations and neglects her studies," Frith said. "But I think she's too bright to do that."