Bismarck, N.D. — Nearly 1,800 people Saturday waved their arms and legs in a fresh snow on the state Capitol mall in hopes of creating a world record for creating the most simultaneous snow angels.

The rows of people in heavy winter coats left imprints resembling angels on the ground, but it didn't take long for the event to degenerate into a massive snowball fight. 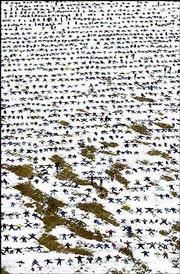 Some 1,800 people flap their arms and legs, making angels in the snow at the North Dakota Capitol in Bismarck, N.D. The Saturday event, sponsored by the State Historical Society of North Dakota, is an attempt to get into the Guinness Book of World Records for making the most snow angels at any one time.

The event was organized to promote a new exhibit for the state historical society. Organizers said staffers at the Guinness Book of Records in London told them no similar world record existed.

"It's a mother-son thing. He is a Guinness book freak. We've gotten them for I don't know how many years," said Gail Stevens, 54, of her 18-year-old son, Chuck. "It tells you everything that goes on in the world," Chuck said of the book.

To officially set the record, the state recorded the name, address and age of each participant.

Results were certified by Catholic Bishop Paul Zipfel and Col. James Hughes of the Highway Patrol. The sheets will be shipped to London to be stored at Guinness headquarters.