Stars roll out the glamour for Oscars

By By Vanessa Sibbald, Zap2it.com 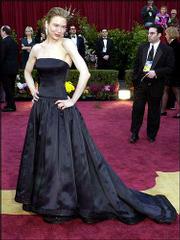 Renee Zellweger was anything but basic in a black dress with train.

Opting for color, both Nicole Kidman and Kirsten Dunst chose a pale ash pink, while Kate Winslet was stunning in a bright red dress that simulated flowers over the shoulder. Halle Berry ï¿½ the one to watch ï¿½ chose a dark burgundy dress with a sheer top featuring a leaf pattern that covered her chest. Jada Pinkett Smith also chose color, pairing a white top with a full yellow embroidered silk skirt.

Although many predicted white would be the color of the night, only Helen Mirren ventured in that direction, while Sissy Spacek chose a while and black suit.

Some decided to have their jewels be the main attraction, such as Laura Harring, who wore $1 million diamond shoes and a 77-carat solitaire diamond around her neck. The "Mulholland Drive" actress said she planned to "party like a princess" later that evening.

Australian stars Russell Crowe and Kidman were a big hit of the night, getting the loudest applause from the fans in the bleachers. Fellow Aussie actor Hugh Jackman's biggest fan was his wife, Deborra Lee-Furness, who said her husband was her "Oscar ornament" of the night.

Zellweger was one of the last to arrive at the ceremony, rushing in just before nominee Russell Crowe. 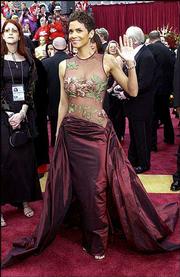 Halle Berry maintained her status as a style expert to watch with this burgundy dress. 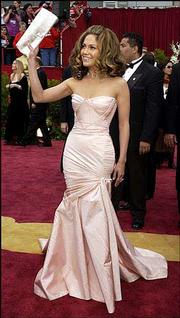 Jennifer Lopez opted for a more conservative look at this year's fashion fest. 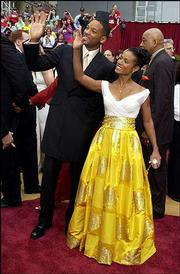 The Smiths ï¿½ Best Actor nominee Will and his wife, Jada Pinkett, went to Oscars in classic style. 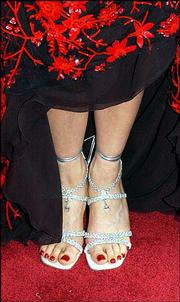 Actress Laura Herring stepped out in style with diamond-laced shoes worth about $1 million.

Though she came up short in her bid for Best Supporting Actress, Kate Winslet stood out in a red gown. 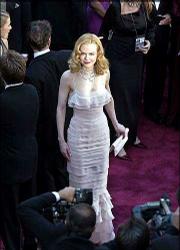