'Beautiful Mind,' 'Lord of the Rings' tie with 4 trophies

"A Beautiful Mind," which also won best director for Ron Howard, tied with "The Lord of the Rings: The Fellowship of the Ring" with four Oscars total. 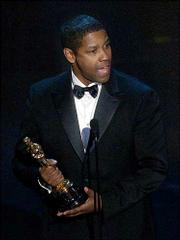 Denzel Washington and Halle Berry were the first black actors since Sidney Poitier in 1963 to win Oscars for leading roles. Washington was named best actor for his role in "Training Day," while Berry was named best actress for her turn in "Monster's Ball." The 74th annual Academy Awards were presented Sunday.

Berry was the first black actress to earn an Academy Award in a lead role, for her portrayal of a death-row widow involved with her husband's executioner in "Monster's Ball." Washington, playing a corrupt cop in "Training Day," became the second black to win best actor.

They joined Sidney Poitier, who received the best-actor Oscar for 1963's "Lilies of the Field" and received a career-achievement award Sunday.

"Oh, my God," Berry said, sobbing and gasping in between words. "I'm sorry. This moment is so much bigger than me. This moment is for Dorothy Dandridge, Lena Horne, Diahann Carroll. ... It's for every nameless, faceless woman of color who now has a chance because this door tonight has been opened."

"It's been 74 years, I've got to take this time," said Berry, referring to the number of years that the Oscars have been presented. 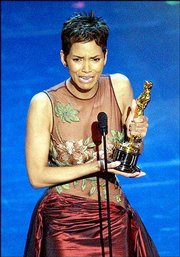 "Two birds in one night," joked Washington, a past supporting-actor winner for "Glory."

"Forty years I've been chasing Sidney. They finally give it to me, and they give it to him the same night," he added, referring to Poitier's honorary Oscar.

Broadbent took the supporting-actor Oscar for his role as the befuddled but doting husband of Alzheimer's-afflicted writer Iris Murdoch, and Connelly won the supporting-actress honor as the steadfast wife of delusional math genius John Nash.

"By some beautiful twist of fate I've landed in this vocation that demands that I feel and helps me to learn," said Connelly, who played the mathematician's wife, Alicia. 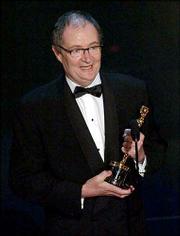 British actor Jim Broadbent won the Oscar for best supporting actor for his role in "Iris."

"I believe in love, that there's nothing more important. Alicia Nash is a true champion of love, and so thank you to her for her example."

Broadbent thanked Murdoch's husband, John Bayley, "who allowed us to plunder and I'm sure misrepresent his life with Iris."

"Thank you, members of the academy for inviting us to the party by creating this animated category to begin with," said Aron Warner, producer of the film. 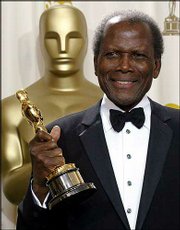 Along with Poitier, Robert Redford received an honorary Oscar for career achievement.

Opening the show, Tom Cruise took a moment to mention the Sept. 11 terrorist attacks, saying he talked with a friend about whether his work as an actor was important in light of the tragedy.

"What about a night like tonight? Should we celebrate the joy and magic movies bring? Dare I say it? More than ever," Cruise said, drawing enthusiastic applause. "A small scene, a gesture, even a glance between characters can cross lines, break through barriers, melt prejudice or just plain make us laugh." 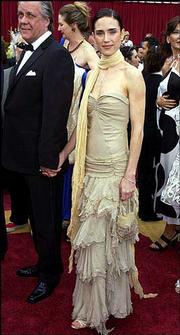 Jennifer Connelly was named Best Supporting Actress for her role in "A Beautiful Mind."