Cronkite, who for decades was one of America's best-known faces as "CBS Evening News" anchorman, told students at Tokyo's Waseda University Americans don't know enough about the actions of their troops in combat. 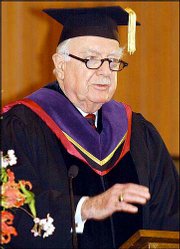 "We have a duty to know what they're doing in our name," he said in a morning talk with about 40 students. "They are keeping the war correspondents at arm's length. It's a very serious gap in our democratic procedures."

U.S. reporters had more freedom to travel with troops and report on their operations during World War II than they have now, said Cronkite, who covered the war in Europe as a reporter for United Press and later helped shape public opinion about the Vietnam War as CBS anchorman.

Cronkite, who retired in 1981, was in Japan to receive an honorary doctorate from the university, one of the country's most prestigious.

He recalled being in Japan during the 1960 street protests against Tokyo's signing of a U.S.-Japan security pact ahead of a visit by U.S. President Dwight Eisenhower.

Satellite links weren't available, and Cronkite had to find the CBS truck that would take his tapes to the airport for delivery home. But protesters jammed his path.

"I decided there was only one way to do it. I got down from my truck, I linked arms with the zengakuren (student protesters), and I went marching ... When I got to the truck at the other end, I said, 'Well, thank you. I get off here.' And I climbed aboard the truck to the airport," he said, chuckling.