If great art starts with a great mess, then the new Lawrence Arts Center has a promising future.

Movers on Tuesday transported 17 truckloads of paintings, easels, theater costumes, office furniture and other assorted items from the center's old building on Vermont Street to its new building in the 900 block of New Hampshire. 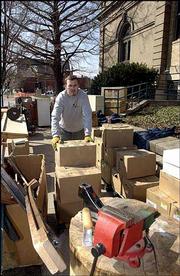 Bill Scoular, a worker for Professional Moving & Storage of Lawrence, helps transport some of the many boxes of items headed to the new Lawrence Arts Center location. The new center, located in the 900 block of New Hampshire, will officially open April 8.

Officials have two weeks to get everything in place for the center's April 8 opening.

"We are here," said Ann Evans, the center's director. "But we are obviously a work in progress. We are all in each other's way. Nothing's in place."

The new 40,000-square-foot arts center was built at a cost of $7.25 million, $4.5 million of which came from the city. It has two exhibition galleries, a 300-seat theater, two dance studios, two preschool classrooms and studios for drawing, painting, ceramics, photography, writing and other arts.

The center's dance troupe, the Prairie Wind Dancers, was already testing one of its new studios Tuesday afternoon.

"It seemed like it took forever for this to happen," said Deb Bettinger, who teaches ballet at the center. "This is a real climax. We're thrilled."

So was Evans, who at times could barely contain her glee while leading a visitor on a tour of the new building, using the word "wonderful" repeatedly.

"The architects really listened to us and met our needs," she said.

Evans, though, does have some nostalgia for the old Carnegie Library, which housed the center for more than a quarter-century. She said the library had helped the center reach out to the community.

"Everybody should be so lucky to have such a building," she said. "It was wonderful for us, and we hope it will be wonderful for its next occupant."

City officials are considering what to do next with the building being vacated by the arts center. Tuesday, City Commissioner David Dunfield asked his colleagues to solicit an architectural evaluation of the building and its potential reuse.

Of course, the center's director thinks the new building is pretty nifty, too.