TRENTON, N.J. — Dudley Moore, the cuddly little Englishman who pined for Bo Derek in "10" and portrayed a lovably forlorn drunk in "Arthur," died Wednesday of complications from a rare and incurable brain disorder. He was 66.

The comic actor died at a friend's home in Plainfield of pneumonia stemming from progressive supranuclear palsy, which is similar to Parkinson's disease and affects one of every 100,000 people. He was diagnosed with the disease in 1999.

British comic actor Dudley Moore is shown in a scene from "Arthur," in which he plays a rich drunk torn between love and money, in this June 1981 handout file photo. "Arthur" was one of Moore's biggest roles. At right, Moore tips his hat after receiving the Commander of the Order of the British Empire award from the Prince of Wales at London's Buckingham Palace on Nov. 16, 2001. Moore died Wednesday at age 66.

Before breaking into the movies, the 5-foot-2 1/2-inch classically trained pianist found success in comedy revues in London and on Broadway as parpt of a legendary British troupe that also included the surrealist comic talent Peter Cook.

In the 1979 hit movie "10," he played a musician determined to marry a perfect woman, embodied by Derek. His film career peaked in 1981 with the smash "Arthur," in which he played a rich drunk who falls for Liza Minnelli. He was nominated for a best actor Oscar. Co-star John Gielgud, who played Arthur's valet, won the supporting actor Oscar.

In a statement, Minnelli said: "I am deeply saddened by the death of my dear friend Dudley Moore. He was a unique individual that was multitalented. He could make the world laugh and brought joy to millions. I will miss him dearly."

There was more than a touch of autobiography in "10." But the happy ending eluded him in real life. Four marriages ended in divorce. 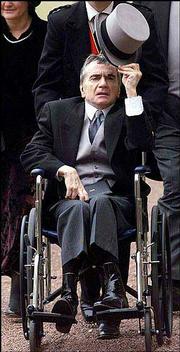 British comic actor Dudley Moore tips his hat after receiving the Commander of the Order of the British Empire award from the Prince of Wales at London's Buckingham Palace on Nov. 16, 2001. Moore died Wednesday at age 66.

It was music that gave Moore his entrance to public performance, first as a chorister and organist in his church, then in 1960 as a young Oxford graduate recruited for the four-man comedy revue "Beyond the Fringe."

Big screen success came after Moore settled in Southern California and met director Blake Edwards in a therapy group. When George Segal walked out of Edwards' production of "10," the director turned to Moore and he was soon a Hollywood star.

"He was such a wonderful spirit," Derek recalled Wednesday. "He could make you laugh hysterically with his jokes and make you cry with his music. He was so gifted."

Edwards and his wife, Julie Andrews, said in a statement: "He was a rare human being who brought warmth and joy to all who knew him. We are so very grateful to have had the opportunity to work with such a lovely human being."

Moore was diagnosed with PSP after suffering balance problems and other symptoms.