Billy Wilder's films include 'Some Like it Hot,' 'Sunset Boulevard'

Los Angeles — Oscar-winning filmmaker Billy Wilder, the Austrian-born cynic whose gifts for writing and directing led to such classics as "Sunset Boulevard," "Some Like It Hot" and "Double Indemnity," has died. He was 95.

Wilder died Wednesday night at his home, said George Schlatter, a producer and longtime friend. Schlatter said his friend of 40 years had been in failing health in recent months and he believed Wilder had been suffering from a bout with pneumonia. 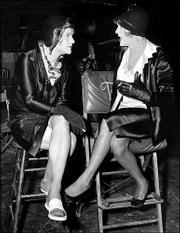 Jack Lemmon, left, and Tony Curtis, are shown during a break in filming during Billy Wilder's 1959 film "Some Like It Hot." In the movie, the two masquerade as women in an all-girl orchestra. Wilder died Wednesday night at his home. He was 95.

"We've lost a biggie," Schlatter, producer of the 1960s comedy show "Laugh In," said Thursday. "I met him when I was just a kid, you know. And I was a fan all that time."

As co-writer, director and producer of the 1960 film "The Apartment," Wilder collected three Oscars, the only person to do so for one film until Francis Ford Coppola won three for "The Godfather II" in 1974. James L. Brooks later did it for "Terms of Endearment" and James Cameron for "Titanic."

Among his other classics: "Sunset Boulevard," "Double Indemnity," "Stalag 17," "The Lost Weekend," "The Seven Year Itch," "Some Like It Hot" and "Witness for the Prosecution."

His wry commentaries on the dark side of authority, love and fame influenced many contemporary filmmakers such as Cameron Crowe, Steven Soderbergh and Curtis Hanson.

"His mind and personality were so strong it was easy to be lulled into thinking he'd go on forever," said Hanson, director of "L.A. Confidential" and "Wonder Boys." "As a man he was witty and irreverent, of course, but he was also a humanist."

Shirley MacLaine, who was in her mid-20s when she co-starred in "The Apartment," said he was an important influence on her career.

"The great master is finished here," she said. "He will write and direct another masterpiece in heaven. I learned more from him than anyone else."

Wilder was also noted as one of Hollywood's best wits. He once remarked of postwar France: "It's a country where you can't tear the toilet paper but the currency crumbles in your hands." William Holden said Wilder had "a mind full of razor blades."

His films were notable for their clever dialogue and an overlay of cynicism and betrayal. His actors won Oscars for their hard-bitten portrayals: Ray Milland as the unremitting alcoholic in "The Lost Weekend," Holden as the suspected prison-camp traitor in "Stalag 17," Walter Matthau as an insurance cheater in "The Fortune Cookie."

"Making movies is a little like walking into a dark room," he once mused. "Some people stumble across furniture, others break their legs, but some of us see better in the dark than others. The ultimate trick is to convince, persuade. Every single person out there is an idiot, but collectively they're a genius."

After beginning his film career in Austria, Wilder came to Hollywood in 1934 knowing 100 words of English. His fortunes turned in 1938 when he first teamed with Charles Brackett, a polished, erudite member of New York's literary establishment.

Brackett's refinement and Wilder's "vulgar energy" produced such scripts as "Midnight," "Hold Back the Dawn," "Bluebeard's Eighth Wife" and the Greta Garbo comedy "Ninotchka." The collaboration lasted 12 years, then Wilder wrote with the late I.A.L. "Izzy" Diamond for 30 years. Unsure in English ï¿½ he spoke with an accent after six decades in America ï¿½ he always needed a writing partner.

Wilder began directing with "The Major and the Minor," a 1942 comedy with Ginger Rogers and Milland. With "Double Indemnity" and "The Lost Weekend," he became a major director as well as writer; the latter brought Oscars in both categories.

Brackett, who produced their films, and Wilder ended the partnership with "Sunset Boulevard," which brought Wilder a writing Oscar. From then on, Wilder produced his own films.

After directing Marilyn Monroe in her two best comedies, "The Seven Year Itch" and "Some Like It Hot," Wilder said he would never again direct the chronically tardy star.

"I have discussed this with my doctor and my psychiatrist and my accountant, and they tell me I am too old and too rich to go through this again," he said.

The Wilder career peaked with "The Apartment," a cynical tale of corporate corruption. Jack Lemmon played an underling who lends his apartment to company executives for trysts with secretaries. MacLaine was the romantic victim of a lying boss, Fred MacMurray, in a rare change of type (his other: "Double Indemnity").

In his late years, Wilder was laden with honors, including the Motion Picture Academy's Irving Thalberg award for a consistently high level of production and the American Film Institute's Life Achievement Award, both in 1988.