Fronting his group the Twisted Brown Trucker Band, an ensemble with middling bar-band skills, Bob Ritchie, aka Kid Rock, demonstrated the truth of his own words "If it's marketed right you'll buy it," Thursday night at Kansas City's Municipal Auditorium.

An adequate showman and a passable rapper, Kid Rock's act is a theatrical conceit. The Kid Rock character is the musical equivalent of a professional wrestling star, complete with comic book bravado and cheap titillation. He taps into white-trash culture by inhabiting a character that augments the usual whiny rebellion of most rap-rock with bad taste and a reverence for classic rock. 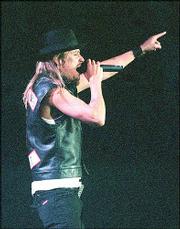 On a stage dressed to resemble the cluttered yard surrounding a decrepit mobile home, Rock's performance was a celebration of mediocrity, glorifying the most inglorious of human urges and aspirations and doing so with almost amusingly minimal skills.

Turning the shortcut to hipness an obscure or ironic cover song can provide a provide a performer upside down, Rock's continual leaning on the most mundane classic rock hits surely bolsters his image as a man of the people. But in performing songs such as "Free Bird," Zeppelin's "Rock and Roll," Fleetwood Mac's "Second Hand News," or the Allman Brothers' "Midnight Rider" only serves to showcase what a vacant songwriter and poor singer he is.

Rock sang his hit ballad "Only God Knows Why" in such a sotto monotone that it seemed that even he was afraid someone noticed he really didn't have the chops to pull it off live.

Because he's unable to deliver his own hits live with the passion that studio polish can simulate, it's little wonder Rock gloms onto decent material where he can find it or fills his set with bloodless exercises in multi-instrumentalism highlighting his inability to play guitar, keyboards or drums better than your average 15 year-old music store habituï¿½. If a pop star can demonstrate versatility by doing many things poorly, then Kid Rock is certainly versatile.

Rave-ups like "Bawitdaba" and "Cowboy" were crowd pleasers and fared better, making the most of Rock's abilities as a rapper. 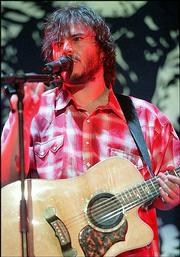 Rock, from Detroit suburb Romeo, Mich., opened his encores with a medley of hits by Michigan artists such as Bob Seger, Ted Nugent, the Supremes and Grand Funk. It concluded with the MC5's "Kick Out the Jams," assuring all that if he can't write memorable songs at least he can recall a few.

Opening act Tenacious D. ï¿½ consisting of front man and film actor Jack Black and sidekick and lead guitar player Kyle Gass ï¿½ performed a hilarious set of material that was by turns sexually explicit to the point of absurdity or designed to deflate the sort of pompous rock clichï¿½s to which Kid Rock earnestly clings.

"Tribute" mocks prog-rock bombast and "The Road is Hard" lampoons whiny rock stars lamenting the oppression that is the rock 'n' roll lifestyle. Set pieces like foot-pump powered, foam rubber rockets standing in for actual pyrotechnics and feuding over which musician's riser was higher added to the madness. Frankly, most of the irony seemed lost on the Kid Rock faithful.