City hopes to polish its image on musical heritage with museum

New Orleans — The Absinthe Bar was once considered the best place on Bourbon Street ï¿½ and one of the best places in the world ï¿½ to catch live blues.

Patrons drank at a mahogany bar said to be 200 years old, and listened to regular gigs by guitarist Bryan Lee, or the debut of a 13-year-old Kenny Wayne Shepherd. B.B. King, Eric Clapton, James Cotton, Robert Plant, Sting and Johnny Winter were all spotted there, and at least some sat in with the band. 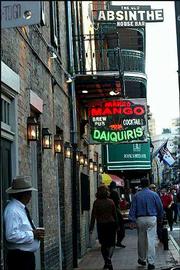 The Old Absinthe House Bar sign still hangs on the building where the Mango Bar now sells frozen daiquiris on Bourbon Street in New Orleans. Musical heritage preservationists hold up the change at the former blues bar as another example of how local landmarks are deteriorating in New Orleans.

But in 1997, new owners turned the Absinthe Bar into the Mango Bar, a takeout daiquiris shop where drink mixers are stacked like washing machines at a Laundromat and the pastel-colored daiquiris pour into plastic "go-cups."

The site has become a symbol of New Orleans' questionable record protecting its renowned musical heritage.

"For some reason we took everything for granted and didn't try to protect those things," says songwriter Bernie Cyrus, state music commissioner for the past decade. "We can't do that any more."

Music history has been on Cyrus' mind in recent years. He's been trying to persuade the National Academy of Recording Arts and Sciences to build its Grammy Exposition and Hall of Fame here.

Fortunately, he says, past preservation failures haven't been an issue.

Music lovers outside New Orleans "hold us in such high regard they don't even know we have those problems ... and they would be shocked," Cyrus says. "They have a better love of our city than we do."

Cyrus says the hall is a "done deal." Michael Greene, the academy's president, said at a recent city bond commission meeting that he wanted the museum built in New Orleans, but he has yet to confirm that an agreement is final.

Some hope that the public backing for what essentially will be a music museum will translate into more emphasis on New Orleans' own music history.

"I see the political will changing dramatically," Cyrus says.

Last month, the city announced a $100,000 grant to fix up the dilapidated home where trombonist Kid Ory lived during most of his 11 years in New Orleans, where he began his career. The grant came after heavy lobbying by the private, nonprofit Preservation Resource Center, whose mission is to save historic buildings.

Mayor Marc Morial's support of the Ory project seemed to mark a shift. Previously, the mayor had said that the resources the city had for musicians should go to those who are working or studying now, rather than trying to save every old building.

The home where Louis Armstrong was born and the row of tenements where he grew up have been torn down. There's no plaque to mark them.

The owner of the home of "cornet king" Buddy Bolden threatened to tear it down after part of it was charred by fire a little over a year ago. He wanted government help to save it, which he never got. The home still stands, for now.

The Masonic and Oddfellows Hall where Bolden is believed to have made his name still stands, but is an abandoned brick shell.

Jazz historian Jack Stewart, who bought and has maintained the former home of pianist Jelly Roll Morton, says efforts to protect the Oddfellows Hall are paying off, however: It's now a nominated city landmark, and a group of preservationists has it and several neighboring buildings under contract.

Still, there remain "lots of buildings with significant ties to music history in precarious situations all over town," Stewart says.