London — The Queen Mother Elizabeth, a symbol of courage and dignity during a tumultuous century of war, social upheaval and royal scandal, died Saturday in her sleep. She was 101 years old.

After years of frailty and ill health, the queen mother died "peacefully" at Royal Lodge, Windsor, outside London, Buckingham Palace said. Her death came seven weeks after the death of her younger daughter, Princess Margaret, at age 71. 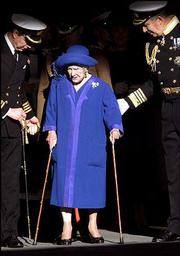 Britain's Queen Elizabeth, the Queen Mother, is aided by the Commander in Chief of the fleet, Admiral Sir Alan West, right, and ship's Captain David Snelson on the Royal Navy aircraft carrier HMS Ark Royal during her last public engagement Nov. 22, 2001. The queen mother died in her sleep Saturday. She was 101 years old.

Queen Elizabeth II was at her mother's side when she died. The queen mother had rarely been seen in recent months because of her failing health.

The queen mother "had become increasingly frail in recent weeks following her bad cough and chest infection over Christmas," said a palace spokesman.

Prince Charles and his sons, Princes William and Harry, were "completely devastated" after being informed of the news on their skiing holiday in Switzerland, a royal spokesman said. Charles, who was very close to his grandmother, cut short his vacation to return home.

Britain's main television and radio channels interrupted regular programs with news of the death. National figures and ordinary people from all walks of life united in expressing admiration and grief for the queen mother.

The queen mother's body was expected to be moved this morning to the Royal Chapel of All Saints in Windsor Great Park. Funeral plans were expected to be announced today with the ceremony scheduled to take place in Westminster Abbey.

Scores of mourners, some bearing flowers, gathered outside Windsor Castle after hearing the news. They stood at the castle gates, quietly talking among themselves. The bells of the nearby St. John the Baptist church tolled to mark the queen mother's death.

Prime Minister Tony Blair said the queen mother was a symbol of Britain's "decency and courage" and the whole nation would join with the royal family in mourning her death.

The queen mother talks with Diana Princess of Wales while attending the Royal Ascot horse race in this undated file photo. The two late members of the royal family were among Britain's favorites.

Former Prime Minister Margaret Thatcher said, "Her death is more than a source of grief to the royal family. It is an irreplaceable loss to the whole nation."

The queen mother was as popular at the end of her life as she had been a half-century before.

She was best known to younger generations as the mother of Queen Elizabeth II and grandmother of Prince Charles. Remarkably sprightly despite her age, the queen mother was a fixture at royal occasions, delighting in mixing with the public and greeting people who flocked to meet her.

She helped restore confidence in the throne during unhappiness and scandals in the royal family during the last years of her life, as three of her four grandchildren divorced. The divorce of Prince Charles from Princess Diana and her death in 1997 in a car crash in Paris shook the British monarchy to its core amid widespread anger that the popular princess had been spurned by the royal family.

The unflagging respect for Elizabeth dated back to World War II, when alongside the public she endured German bombings and visited shattered homes.

The queen mother underwent extensive surgery in 1995 and 1998 for hip replacements, and in 2000, fell and broke her collarbone. Until a few months ago, she continued a regular schedule of public appearances that would have daunted a much younger person. When her health became very frail, she sometimes appeared in public on an electric cart, the "queen mum mobile."

While admired for her dignity and sense of duty, the queen mother was also revered for enjoying life. She relished horse racing, social gatherings and was known to enjoy a drink.

She might have been expected to retire from public life when her husband, King George VI, died in 1952. But after their eldest daughter's succession to the throne, she took a new title, Queen Elizabeth The Queen Mother, and a full load of royal duties, which she carried into her 90s.

The former Lady Elizabeth Bowes Lyon, daughter of a Scottish earl, was married in 1923 to Prince Albert, Duke of York, second son of King George V. They had two daughters, Elizabeth and Margaret Rose, and lived quietly until 1936. The duke's elder brother succeeded to the throne that January as King Edward VIII, and by mid-December had abdicated to marry American divorcee Wallis Simpson.

The Duke of York took the throne as King George VI, a reluctant monarch whom many believed unsuited to the job.

But the steadfastness and sympathy of the new king and his wife through the deprivation and danger of World War II cemented a bond with the nation that held the queen mother firmly in British affections for the next half-century.

Queen Elizabeth, left, later to become the queen mother, steps over the debris left by the bombing of a corner of Buckingham Palace in this Sept. 10, 1940, file photo. Her husband, King George VI, surveys the wreckage behind her. The queen mother died Saturday.

Britain's Queen Elizabeth, later the queen mother, and her husband, then the Duke of York, pose together while on their honeymoon at Polesden Lacey, England, in this May 1, 1923, file photo.