Exhibit shows how artists inspire each other

Engraver seems to have been influenced by bronze statuettes

The new exhibition at the Helen Foresman Spencer Museum of Art shows how one artist can influence another.

The exhibit, "Goltzius and the Third Dimension," reveals new visual evidence that etchings by the late 16th-century engraver Hendrick Goltzius were influenced by the bronze statuettes created by his fellow countryman Willem Danielsz von Tetrode. 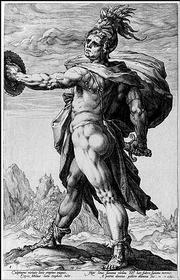 This is a detail from "The Massacre of the Innocents," an engraving by Hendrick Goltzius. The work was created in 1587-1589.

The prints and bronzes in the exhibit were drawn from the private collection of the Hearn Family Trust, with the exception of one loan from the Bowdoin College Museum of Art in Brunswick, Maine.

Goltzius was the most esteemed Dutch engraver of the late 16th century. He sought to elevate engraving to the level of the fine arts of sculpture and painting. He succeeded in a series of colossal prints that depict the muscled human body with virtuosity.

Scholars have long speculated that Goltzius was greatly influenced by the bronzes created by Tetrode, a native of Delft in the Netherlands. However, no documentary evidence exists to prove this.

Scholars have scrutinized the two artists' relationship since at least the 1970s.

"The exhibition offers the first opportunity to see the Tetrode bronzes side by side with the engraved works of Goltzius," said James A. Ganz, curator of prints, drawings and photographs at the Clark Art Institute, where the show opened last October.

Viewers will see some of the most powerful representations of the male nude in the history of Western art. The two dozen prints by Goltzius on display were created in a period of intense activity in the late 1580s.

Though Goltzius turned to painting later in his career, his reputation rests on his achievements as a graphic artist. In his workshop in Haarlem in the Netherlands, Goltzius developed an engraving technique of overlapping curved lines that he used to depict the curves of the human body. Because of this and other printmaking techniques, his work has a three-dimensional appearance.

Goltzius' work, like that of other mannerist artists of the 16th century, featured powerfully built human figures with bulging muscles and intense facial expressions. These same characteristics are found in several sculptures by Tetrode.


Tetrode spent time in Italy and in the 1560s introduced Dutch collectors to the genre of small bronze statuettes then fashionable in Italy. Relatively few of Tetrode's sculptures have survived to the present day. This scarcity has limited the study of the two artists' interconnectedness prior to this exhibition.

Photographing the works for the catalog led to an interactive study of the works that is available online at www.clarkart

Juxtaposition of some of Goltzius' most famous images, including Hercules, with Tetrode's sculptures offers compelling visual evidence of their connection.