While Glen Tilbrook is not exactly a household name, you couldn't tell that from the sing-along, request-shouting fans that filled Kansas City's Grand Emporium Tuesday night for his solo acoustic show.

In the British invasion's third wave ï¿½ the one that encompassed punk and new wave ï¿½ one of England's finest exports was the pop-oriented band Squeeze. Led by song-writing partners Chris Difford and Glen Tilbrook, Squeeze is perhaps best remembered for the hit single "Tempted," ironically not originally sung by lead vocalist Tilbrook. 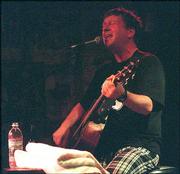 The affable Tilbrook hobbled to the Grand Emporium stage, one day off crutches following an ankle sprain stemming from an ill-conceived bit of rock 'n' roll theatrics earlier in his tour. With his youthful pop tenor still crystalline at age 44 and his guitar skills sharper than ever, he performed a 27-song set that featured songs from his solo album "The Incomplete Glenn Tilbrook," released in 2001. Tilbrook also mixed in a few obscure songs and drew heavily from the best of Squeeze's catalog.

After "Letting Go" from Squeeze's 1991 album "Play," 1981's "Messed Around" and last year's "This Is Where You Ain't" ï¿½ a trio of songs covering three decades ï¿½ Tilbrook asked the audience to slide tables and chairs forward, closing the chasm between the artist and his fans.

Nothing strips a song more bare than paring it down to one guitar and one voice. Songs including "Vicky Verky," "Piccadilly," "Another Nail For My Heart" and "Pulling Mussels (From The Shell)" all stood up very well without a band behind them.

After a very brief break for a run to the green room Tilbrook returned, serenading the audience on his way back to the stage, and stopped to perform "Goodbye Girl" without amplification in the middle of the room. Sure it was premeditated ï¿½ after all, he took the 12-string with him ï¿½ but it was charming.

The talkative troubadour prefaced a performance of Elvis Costello's "From A Whisper To A Scream," on which Tilbrook shared duet vocals by explaining that live he sings both parts unless, he joked, someone wanted to help him out. Surprisingly, a hand near the front of the stage went up and the game singer shrugged and invited the brave volunteer to the stage. The young fan, identifying himself only as Brian, nailed the song cold and created for himself a true rock 'n' roll moment.

Tilbrook closed the set with "Tempted" and didn't bother with the pantomime of departing the stage before performing a four-song encore comprised of "I've Returned," "Hourglass," "Parallel World" from the solo disc and "Is That Love." Several patrons could be heard singing the final song on their way out of the club.