During last November's ratings period, known as sweeps, a "Carol Burnett Show" retrospective earned surprisingly strong ratings. So it makes perfect sense that during the May sweeps period all the networks have picked up on the nostalgia trend. Kind of makes you yearn for the good old days when sweeps meant you'd see new and different programming.

ï¿½ Tonight's big nostalgia-fest celebrates "The Honeymooners 50th Anniversary Celebration" (9 p.m., CBS). Kevin James ("King of Queens") hosts this salute to Brooklyn's royal family, Ralph and Alice Kramden. Television stars, including Tom Hanks, Carol Burnett, Dennis Franz and John Ritter will discuss their love of the show, their favorite episodes and the impact that "The Honeymooners" had on their acting. Original cast members Art Carney (Ed Norton) and Joyce Randolph (Trixie) will also be on hand to recall "The Honeymooners" finest moments and reflect on its larger than life star, Jackie Gleason. 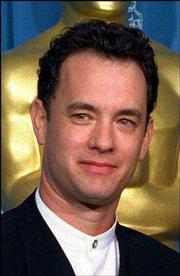 Tom Hanks, shown in this March 1995 file photo, is one of the celebrity guests on CBS' 50th anniversary tribute to "The Honeymooners."

ï¿½ Tim Conway and Vicki Lawrence, two stars of Burnett's comedy hour, guest star on tonight's episode of "Yes, Dear" (7:30 p.m., CBS) as Greg's overbearing mother and hen-pecked dad. While Conway and Lawrence display some of the chemistry that made their old show sparkle, they still don't provide a decent excuse to turn on "Yes, Dear," the kind of witless and uninspired sitcom that gives sitcoms a bad name.

ï¿½ Over on NBC, "Third Watch" (8 p.m.) continues the network's 75th anniversary theme by reuniting three "Hill Street Blues" stars (Veronica Hamel, Bruce Weitz, and Ed Marinaro) in an episode in which Taylor (Amy Carlson) learns that the body of her firefighter father has been found at the World Trade Center.

ï¿½ You may not remember the singers, but you can't get those songs out of your head. I'm talking about one hit wonders, hugely successful, though often silly songs by musical acts that quickly became obscure. VH1 will devote the next five nights to "100 Greatest One Hit Wonders" (9 p.m.). Tonight's segment counts down hits from 100 ("Kung Fu Fighting" by Carl Douglas) to 81 ( "Just a Friend" by Biz Markie). The festival ends Friday night with a countdown of the top 20, culminating with the No.1 wonder, "Macarena" by Los Del Rio.

ï¿½ Ruthie learns that her marine pen pal has been killed in Afghanistan on "7th Heaven" (7 p.m., WB).

ï¿½ Ray fails to settle a Mother's Day spat between Debra and Marie on "Everybody Loves Raymond" (8 p.m., CBS).