Artifacts from 17th to 20th centuries showcased at Stanford

PALO ALTO, CALIF. — When a group of New England explorers set sail more than 200 years ago, they brought back souvenirs from the indigenous people they encountered, hoping to inspire later generations.

Founded in 1799, the East India Marine Society had gathered so many baskets, masks, blankets, headdresses, weapons and other American Indian items that they established a museum in Salem, Mass., 26 years later just to keep it all. 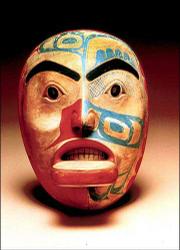 This mask is part of 100 works from the indigenous people of North and South America that will be on display through Aug. 11 at Stanford University in California. The four-city tour of "Uncommon Legacies: Native American Art from the Peabody Essex Museum" is a representation of the oldest ongoing collection of art from the native people of the Americas.

The Peabody Essex Museum now has more than 20,000 pieces in its American Indian collection, and can display only a fraction of them ï¿½ one of several injustices curators of a new exhibit at Stanford University are hoping to counteract.

A hundred items collected from the indigenous peoples of North and South America are included in "Uncommon Legacies: Native American Art From the Peabody Essex Museum," on view through Aug. 11 at the Iris & B. Gerald Cantor Center for Visual Arts.

Rarely seen treasures from the 17th through 20th centuries include headdresses of blue and red macaw plumes worn by Brazilian chiefs, and a Chilkat goat wool blanket depicting clan symbols that initially could only be made or worn by wealthy Tlingit people of the Pacific Northwest Coast.

The show also tries to erase stereotypes and ethnocentric viewpoints by depicting the everyday lives of Indians a centuries ago, said Tom Haukaas, a Lakota artist from the Rosebud Sioux reservation in South Dakota who consulted on the show.

Marine Society members collected pipes, clubs and other symbols of warfare. However, for this exhibit, Haukass and other Indian consultants made a point of including such items as hats, baskets, food ladles and a baby carrier made by Plains tribes in 1850s.

"We were trying to de-romanticize, to show the breadth of our cultures and still present pieces of great aesthetic appeal," Haukass said. "Reality is sitting at home."

One of several early American maritime groups, the society had a unique purpose: form a museum of natural artifacts from beyond the Cape of Good Hope of South Africa and Cape Horn of South America. To be a member, marine men had to sail around both continents.

The seafarers met inhabitants of the Amazon forests while trading for rubber in South America. Guano and silver trades brought them to Peru, and a need for lumber drew them into northern New England and Canada. The fur trade ï¿½ particularly sea otter pelts in demand in China ï¿½ was the attraction in the Pacific Northwest.

The indigenous people soon saw a way to make money off the visitors, creating items solely to be traded, such as human face masks and black argillite smoking pipes made by the Haida, said John Grimes, the American Indian curator at the Peabody Essex.

The marine men kept detailed records, although they more often recorded their own feelings than the customs they encountered, said those who have studied their journals. 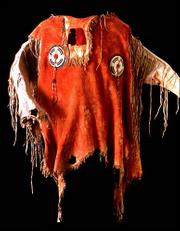 A vest made of raw hide is among the works in the collection that will be shown at the museum.

"The most preposterous that I ever saw is the ornaments they wear to their mouth," wrote Robert Haswell in May 1789, describing the Haida women who lived near present-day British Columbia. "An incision is cut in the lower lip ... into which is forced a piece of wood in form oval."

Society members often documented their collections in their journals, recording dates, places and the tribe involved.

Many other American Indian collections of the time lack such documentation, said Manuel Jordan, a curator at Stanford's Cantor Arts Center.

Thanks to the record keeping, at least one tribe, the Mohegan in Connecticut, have requested four items for repatriation, including a historic picture box.

Under the 1990 Native American Graves and Repatriation Act, museums that receive public money are required to release a list of their holdings to American Indian tribes. The museums are also obligated to negotiate with tribes if they have sacred religious objects, items used for the ongoing practice of religion, or items important to a nation's identity.

In 1997, the Peabody Essex returned a round picture box that represented one of the few surviving written language records of the Mohegan. The box, made of elm, is carved with designs that document the migration of the tribe's members to Oneida, N.Y.

Besides the Mohegan, native Hawaiians and Cayuga in New York are the only tribes to request items from the Peabody Essex since museums made their holdings public in 1992, Grimes said.

Grimes understands this exhibit may stimulate conversations about repatriating some objects, and he said museums should be proactive about sharing their collections with native communities. "We're open to that and welcome it," he said.

The same kind of thinking prompted the curators to include American Indian input for this exhibit, he said.

"There is no reason that a museum at this date and time should be presuming to speak for native communities and interpreting native art without the interpretation of native artist and scholars and curators," Grimes said.

"Today museums are no longer places where visitors are told what to think."

The show will make stops in Cincinnati and Richmond, Va., and end its tour at its origin in Salem, Mass., in September 2003 for a two-month showing.