The farewell edition of "The Rosie O'Donnell Show" is next Wednesday, as the host leaves to raise a family and do other things. 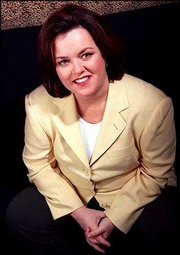 O'Donnell was named best talk show host every year she was nominated, sharing the award with Oprah Winfrey in 1998 and Regis Philbin in 2001. She called it "the best six years of my life."

"It sounds trite to say, but seriously, the amount of grace I've been able to experience through this job has been life-altering, and I thank you for the privilege," she said.

Earlier Friday, "The Rosie O'Donnell Show" was named best talk show for the fifth year in a row. Winfrey stopped submitting her show for Emmys after 1998.

ABC's "One Life to Live," which has been on the air since 1968, was named best daytime drama for the first time.

Peter Bergman of "The Young and the Restless" won best actor in a daytime drama, his third award and first since 1992. Susan Flannery of "The Bold and the Beautiful" won best actress, also for the third time.

Because of a goof on the CBS telecast, the camera initially cut to Susan Lucci and it was unclear which Susan won. Instead, Lucci lost for the 20th time (she's won once).

Duhamel rushed into the back of the audience to hug his parents, and a tearful Jennifer Finnigan of "The Bold and the Beautiful," who won best younger actress, also thanked mom and dad.

"You have supported me for my entire life. This is for you," she said, clutching her trophy. "But I'm keeping it."

Befitting a genre not known for subtlety, the first soap opera actor to appear onstage Friday ï¿½ Melody Thomas Scott of "The Young and the Restless" ï¿½ wore a billowing gown festooned with stars and stripes.


Asked backstage what designer made her dress, Scott said, "America made it. Betsy Ross made it."

LeVar Burton, who has worked on PBS' "Reading Rainbow" since 1983, won his fifth Daytime Emmy as best performer in a children's series.

"Jeopardy!" was named best game show for the eighth time.

Veteran Bob Barker, who was host of the Daytime Emmy ceremony, was named best game show host for the 12th time.

The Emmys are given out by the National Academy of Television Arts and Sciences. 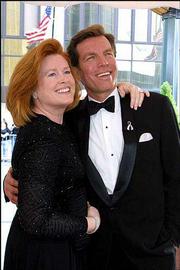 Peter Bergman, who plays Jack Abbott in CBS's "The Young and the Restless," poses with his wife as they arrive at the 29th annual Daytime Emmy Awards. Bergman won the Daytime Emmy in the "Outstanding Lead Actor in a Drama Series" category. 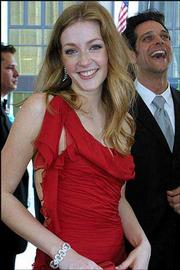 Jennifer Finnigan, who plays Bridget Forrester Sharpe in CBS's "The Bold and the Beautiful," won a Daytime Emmy for "Outstanding Younger Actress in a Drama Series."