New Orleans — In what he fears may be his dying days, cancer-stricken historian Stephen Ambrose spends much of his time at his word processor, trying to set the record straight about some of the views he espoused as a young professor.

Perhaps best known for his 1994 best seller "D-Day," Ambrose, 66, has put a World War II project about the Pacific on hold in favor of a new book depicting his own transformation from a left-wing demonstrator to a super patriot. 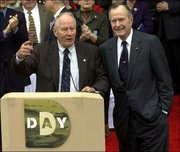 Stephen Ambrose, historian and founder of the National D-Day Museum, thanks former President George Bush during ceremonies at the museum in this Dec. 7, 2001, file photo, in New Orleans. Ambrose, who wrote the 1994 best seller "D-Day," is working on a new book depicting his own transformation from a left-wing demonstrator to a super patriot.

"I want to correct all the mistakes I made ... when I would tell my history classes that dropping the bomb on Hiroshima was a crime, that the Mexican-American War was nothing but a land grab and that people like Henry Ford and J.D. Rockefeller got into philanthropy to buy their way into heaven," Ambrose said in his typically raspy tone and energetic meter. "I want to tell all the things that are right about America."

When he was diagnosed with lung cancer a month ago, Ambrose, a longtime smoker, was given six months to live without treatment. He opted for experimental chemotherapy at LSU Medical Center in New Orleans.

For now, his routine hardly befits a man fighting for his life: awake before dawn, writing eight hours a day, riding his bike, walking his dog, working out at a gym. This is, after all, a man who made his mark telling stories of soldiers who stared down death and went about their work.

"After I got over the shock, the outrage, the denial, I got to thinking how lucky I've been and that it's possible I only have time to do one more book," Ambrose said in a phone interview from his beach home in Bay St. Louis, Miss., about an hour's drive east of New Orleans.

He completed 133 pages of "A Love Song to America" in his first half-month of writing, but cannot say how long the book will be.

"It depends how long I live," he said. "I've got a lot of things I want to write about."

Those close to Ambrose are not at all surprised.

"Writing history for him is the same as breathing," said Douglas Brinkley, who has worked on books with Ambrose and took over for him as director of the Eisenhower Center for American Studies at the University of New Orleans.

Almost daily throughout his career, Ambrose would write uninterrupted from 5 a.m. to 10 a.m., regardless of where he was, Brinkley said.

Ambrose has published more than 30 books on subjects ranging from World War II to Presidents Nixon and Eisenhower, the Transcontinental Railroad and Lewis and Clark's exploration of the American West. His research and interviews made him believe America was the greatest country on earth ï¿½ a place, for all its faults, that should be celebrated for its progress, freedom and generosity, he said.

His new book will include chapters on race in America, on George Washington and on his own experience as "a Yankee in Dixie." It will touch on his personal relationships with historical figures such as Dwight Eisenhower, but won't be what he would call a memoir.