No child should have the blues

Blues music is rarely aimed at the pre-teen demographic.

With frank lyrics that tell of heartbreak, affliction and regret, the style doesn't generally appeal to the Teletubbies crowd.

However, Saturday night at Liberty Hall, blues musicians and their fans are making a connection with area children through the Ninth Annual Blues Revue/Toys for Tots Benefit.

Four bands will take the stage: Lee McBee and the Confessors, The Mezcal Brothers, Blue 88 and Music Row. Proceeds will go to the local chapter of the charity organization (originated by the U.S. Marine Corps Reserve) that distributes toys to needy youngsters over the holidays.

"No child should have the blues ï¿½ that's been our motto," says Rick Reding, founder of the event.

Reding, a former Marine and lifelong blues fan, first came up with the idea for the music showcase out of necessity.

"We used to volunteer at the Toys for Tots telethon," recalls Reding, who has organized the gathering with his wife, Sarah, throughout the last decade. "Then we decided to do some softball tournaments to make a little money for them. The first year turned out great, but the second year we played ball in late October when it was five below zero.

"That year we started thinking, 'Man, we need to do something that makes money but that we enjoy a little bit more. How about drinking a little beer and listening to some blues?'"

Since then the Blues Revue has remained a yearly tradition.

"It's a really nice, good time," says concert promoter Merle Zuel. "It's a middle-age crowd there ï¿½ not that there's anything wrong with a college crowd. It's just a little different crowd. This year we're really trying to offer more blues than classic rock."

Zuel, who also does the booking for Stu's Midtown Tavern, initially had the Lawrence-based McBee scheduled to play his club that night. But a bit of juggling allowed the harp player to appear at the larger venue.

Other national artists on the bill include The Mezcal Brothers, a quartet from Lincoln, Neb.

Two area ensembles will kick off the show, including Blue 88, an act from Kansas City, Kan.

"Blue 88 is a melding of blues and Southern rock, kind of in the vein of The Allman Brothers or Janis Joplin," Zuel describes. "They won the first round of the KC Blues Society's Battle of the Bands competition. They're going to the final round at the Grand Emporium. The winner heads to Memphis to represent Kansas City."

Opening will be Lawrence's Music Row, who Zuel characterizes as "a mixture of country and classic rock."

"Some of the bands we've had in the past have strayed a little ways from the blues," adds Reding. "Music Row is more of a honky-tonk kind of group. They do a couple of blues tunes just to please me. If they're going to open the show, I don't want them to open it up with a twang. (laughs)"

While the acts and sound man are paid a minimal fee, Liberty Hall donates the venue for the evening. Reding says the event has raised between $2,000-$4000 for Toys for Tots. 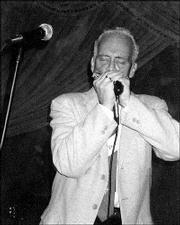 "I'm hoping we can make $3,000 this year," he says. "A lot of that depends on how much I get out and hustle getting local sponsors."

Toys for Tots has been an ongoing program since 1947, when a troop of Marine reservists collected and handed out 5,000 toys in the Los Angeles area.

Reding's involvement began in the 1980s. One particular incident made him a lifelong supporter of the occasion.

"The coolest thing that happened to me was when I was working at the telethon," he remembers. "This couple came in with a little one, and they handed me a few toys. The guy was telling me, 'Last year we received stuff from Toys for Tots. You guys made our Christmas last year. Now we're on our feet, and I just wanted to return the favor.'"

Tickets for the Ninth Annual Blues Revue/Toys for Tots Benefit are $10. The first band takes the stage at 7:30 p.m. Local music program "Fusion" will be there capturing the performance for a December broadcast.

"KU fans ought to have the blues after K-State whips the pants off them Saturday," goads Reding. "So they should come on down."

As for the future of the live event, there may be some impending changes ï¿½ at least behind the scenes.

"I don't get out like I used to and don't have the contacts that I used to. Merle really enjoys what he's doing. I can still help him out, but I told him I wanted a free ticket every year after that. (laughs)"