It is a trend that at least on the surface makes sense. A publisher pairs up with a celebrity who is willing to do interviews and attend book signings; in return, the star conquers a new marquee: the cover of a kid's book.

Similar formulas have worked for beauty, diet and entertaining books.

However, as most parents know, children can be finicky. They also aren't necessarily impressed by movie stars who aren't of the animated variety.

"Celebrity books sometimes are being sold more to the parents, the gatekeepers of book purchases," says David Gale, editorial director of Simon & Schuster's Books for Young Readers division. Still, he adds, successful children's books eventually have to appeal to kids because youngsters make very clear their likes and dislikes, and it is children who build up a base for an author's future books.

A celebrity children's book is a bigger risk for a publisher than a book written by any other first-time author, Gale says.

"When (a book) comes from a celebrity, it actually sends up a red flag," he says. "Other authors resent it because the celebrities get press attention. Stores can be reluctant. But even if I'm wary, if it's a good book, I want it.

"You can make a better return because you'll be on the 'Today,' show but it costs more because you pay more for the book and the travel expenses are higher."

Lithgow's books ï¿½ there have been three, including the new "Micawber" (Simon & Schuster) ï¿½ owe their popularity to the winning combination of snappy and witty rhythmic lines, bright illustrations by C.F. Payne and Lithgow's own commitment to his young fans. He also performs for his readers at children's concerts across the country.

Unlike other children's books that might court customers with colorful cover art and enchanting drawings, the celebrities are the key to promoting their books.

Diane Mangan, children's category director for Borders Books and Music stores, names Lithgow and Curtis as two celebrities who have proven themselves as children's book authors. She says the quality of their books is good; they make good publicity plans and are respected by the close-knit circle of children's authors. Mangan predicts that Curtis' "I'm Gonna Like Me: Letting Off a Little Self-Esteem" (Joanna Cotler Books) will be the best-selling picture book at Borders this fall.

Other big titles backed by big names are "Halloween" (Little, Brown), by Seinfeld; "Please, Baby, Please" (Simon & Schuster), by Lee and his wife, Tonya Lewis Lee; and "Dumpy and the Big Storm" (Hyperion), by Andrews, who uses her full married name of Julie Andrews Edwards on the series of Dumpy the Dump Truck books she writes with Emma Walton Hamilton. 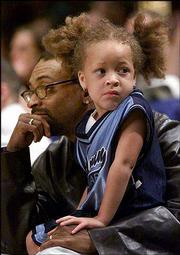 Some best-selling adult authors are trying their hand at children's books as well, including Michael Chabon, Carl Hiaasen and Toni Morrison, who writes with her son, Slade. Hiaason's book, "Hoot" (Knopf Books for Young Readers), and Chabon's "Summerland" (Miramax/Hyperion Books for Children) both are intended for youngsters 9-12. Morrison, who has written for children in the past, plans her "The Book of Mean People" (Hyperion Books for Children) for the 4-8 age group.

The industry also has its own "stars," such as Laura Numeroff, but they usually aren't part of a publisher's splashy publicity campaign, and they typically aren't household names, Mangan says.

And of those authors who have achieved name recognition ï¿½ such as Judy Blume, Maurice Sendak and Shel Silverstein ï¿½ how many people even know what they look like? Authors like Curtis and Lithgow, however, are easily recognized.

Curtis says that for a while she felt like an "interloper." But with five books out, she's become a full-fledged children's author. "The slash in actress-slash-author has been reversed already, and in a year or two, I'll be making my full living as a writer," she says.

"Deaf Child Crossing," a semi-autobiographical story about a tested friendship between a deaf girl and a hearing girl, is Matlin's first book, but she says she sees it as a series. "The book was left so there could be more adventures," Matlin explains through a sign-language interpreter.

The book is intended for young adults, while most other celebrity books are for toddlers and preschoolers.

"I actually didn't think about age," Matlin says. "This is just the part of my life that I wrote about." Matlin's three children are 6, 2 and 3 months old.

Motherhood isn't what prompted Matlin to write for children. She says she has wanted to share her story since she was a child. But knowing how much her children appreciate the book has been the greatest reward.

"My daughter is in the first grade, and she's starting to read," Matlin says. "She couldn't be prouder of me."