London — Dressed in wizards' hats and witches' robes, hundreds of screaming fans greeted the stars of the new Harry Potter movie at its glitzy world premiere Sunday in London.

"Daniel, Daniel, Daniel," chanted a crowd of teenage girls, as Daniel Radcliffe, the young actor who plays the boy wizard, arrived for the screening of "Harry Potter and the Chamber of Secrets."

"It is really strange, but very exciting," Radcliffe said of the enthusiasm that greeted him upon his arrival at the Odeon cinema in London's Leicester Square.

Fans waited several hours, braving rain and wintry weather, in the hope of getting a glimpse of the film's cast.

They cheered wildly at the arrival of Rupert Grint, who plays Harry's ginger-haired friend Ron Weasley, and Emma Watson, who stars as schoolmate Hermione Granger.

Robbie Coltrane, who plays the half-giant Hagrid, also received a warm welcome from the crowd, which lined the famous square and stood in a specially constructed stand decorated in the colors of the story's Hogwarts School of Witchcraft and Wizardry.

"He would have liked to have been here tonight," Radcliffe said. "He liked a good party. We did some very emotional scenes together. It is very hard." 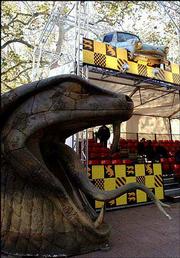 Fans begin to gather in the grandstand outside the Odeon Leicester Square cinema in London before the premiere of "Harry Potter and the Chamber of Secrets." The grandstand, decorated in the colors of the story's Hogwarts School of Witchcraft and Wizardry, was complete with the Ford Anglia car featured in the film.

In the film, based on the novel by J.K. Rowling, the young maestro Harry enrolls for his second year at Hogwarts. But soon he is forced to confront a sinister force that is intent on terrorizing the school. Aided by his friends Ron and Hermione, Harry rides to the rescue.

Actor Kenneth Branagh has joined the cast as Gilderoy Lockhart, Professor of Defense Against the Dark Arts. Alan Rickman, Maggie Smith, Harris and Coltrane take the roles that they played in the first Potter film, "Harry Potter and the Sorcerer's Stone."

Director Chris Columbus has described the new film as "darker and funnier" than the last, with the character of Harry exuding "more confidence and strength."

The film goes on general release in Britain and the United States on Nov. 15.

"Harry Potter and the Sorcerer's Stone" is the second biggest film of all time ï¿½ after "Titanic" ï¿½ and has grossed $975 million worldwide.