His five awards tied a record for most received in one year. Johnny Cash had that many in 1969, as did Vince Gill in 1993.

"CMA's been a little too generous to me tonight," Jackson said while accepting the top honor. "There's probably people who are a little more exciting on stage, but I just walk out there and sing."

Jackson, who was nominated a record 10 times, was also named male vocalist of the year, won album of the year for "Drive," and song and single of the year for his Sept. 11-themed "Where Were You (When the World Stopped Turning)." His debut of the song at last year's telecast stopped the show.

Jackson's album award was the second such nod of his career. His first came in 1994 when he shared the honor for his contribution to the all-star collaboration "Common Thread: Songs of the Eagles." He won entertainer of the year for the first time in 1995.

An emotional Martina McBride accepted her second female vocalist of the year award after performing her new single "Concrete Angel" for the crowd at the Grand Ole Opry House. She also won in 1999.

"I was not prepared for this emotion that I'm feeling, it's just so amazing that I get to live this dream," she said, her voice cracking as she wiped away tears. 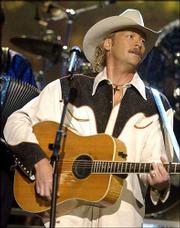 The Dixie Chicks were named vocal group of the year for the fourth time; Brooks & Dunn took home their 10th award for vocal duo of the year; and Brad Paisley beat out Jackson for music video of the year honors for "I'm Gonna Miss Her (The Fishin' Song)."

The night also signaled the return of Shania Twain to the national spotlight. She added a bit of pop to the show, bounding onto the stage in a black catsuit to sing "I'm Gonna Getcha Good" ï¿½ her first network performance since beginning an almost three-year hiatus in 1999, when she was CMA entertainer of the year.

She releases a new album later this month.

Vince Gill, host of the show for the 11th-straight year, joked after Twain's performance about his yearly effort to lose weight before the awards. "I've lost 26 pounds for this year's show. I lose 20 more, I'm showing my belly button like (Twain)," he said with a laugh.

"I like to think of myself as a link, a link between the real pioneers of country music and the stars of tomorrow," Wagoner said after taking the stage. Carlisle waved from his seat in the audience, but didn't speak.

Before the show, Willie Nelson received the vocal event of the year award for "Mendocino County Line," his single with Lee Ann Womack. And Jerry Douglas, who plays dobro with Alison Krauss and Union Station, was named musician of the year. 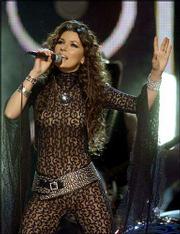