Beverly Hills, Calif. — A jury on Wednesday found Winona Ryder guilty of stealing more than $5,500 worth of merchandise during a shoplifting spree at a Saks Fifth Avenue last year, but the actress will likely avoid jail.

The prosecutor said she would not try to put the 31-year-old, two-time Academy Award nominee behind bars, saying she would seek probation, community service and restitution at Ryder's sentencing on Dec. 6. The charges could have carried up to three years in prison.

Ryder showed no emotion after the jury, which included former movie studio chief Peter Guber, convicted her of felony grand theft and vandalism, the latter charge for cutting sensor tags off merchandise, and acquitted her of burglary.

Defense attorney Mark Geragos said he would ask for a new trial.

Deputy Dist. Atty. Ann Rundle said outside court that she found Ryder to be "very nice" and that prison was never considered. "This was never about her character, only her conduct," Rundle said. "We were simply asking for Miss Ryder to take responsibility for her conduct."

Ryder was arrested Dec. 12, 2001, as she left the Beverly Hills Saks, her arms laden with packages. The jury was shown videotapes of her wandering through the store's boutiques and taking a large amount of clothes into dressing rooms.

Security staff testified that after being caught, Ryder claimed a director had told her to shoplift to prepare for a movie role.

At the start of her shopping trip, she paid more than $3,000 for a jacket and two blouses. The defense claimed Ryder believed the store would keep her account "open" and charge her later. But there was no evidence of an account. 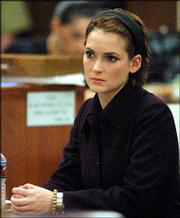 Actress Winona Ryder listens as the verdict is read in her shoplifting trial at the courthouse in Beverly Hills, Calif. The jury Wednesday found Ryder guilty of felony grand theft and vandalism but cleared her of burglary.

Ryder's arrest drew international attention. Media interest grew when Ryder appeared on "Saturday Night Live" and MTV joking about her case. At her preliminary hearing, Ryder was jostled by a crush of TV cameras and suffered an arm injury.

"Little Women" earned Ryder an Academy Award nomination for best actress. She was previously a supporting actress Oscar nominee for "The Age of Innocence."

Ryder was raised by parents who were part of the 1960s counterculture. Her godfather was the late LSD guru Timothy Leary.

In 1993, Ryder posted a $200,000 reward in the kidnap-murder of a 12-year-old girl, Polly Klaas, in Petaluma, Calif., where the actress grew up. When Ryder was charged with shoplifting, Polly's father, Mark, came to legal proceedings to support her.