No differentiating between fallen stars, convicted politicians or common criminals in prisons

Elkton, Ohio — Even at a fancy federal prison like the Elkton Federal Correctional Institution, the night life is lousy. It's lights out at 9:30 p.m.

For future Elkton inmate Vincent "Buddy" Cianci Jr., the flamboyant former mayor of Providence, R.I., and others used to the limelight, the glare of prison floodlights marks not just a loss of freedom, but a complete revolution in lifestyle.

Manhattan publicist Lizzie Grubman, darling of the New York tabloids, backed her luxury SUV into a crowd outside a trendy Long Island nightclub in July 2001. She is now serving a 40-day jail sentence in an isolation cell intended to protect her from prison violence, according to her lawyer Stephen Scaring.

"She's toughing it out. She hasn't complained once," Scaring said.

Cianci is scheduled to arrive at Elkton on Dec. 6 to begin a five-year sentence for racketeering. He is appealing his conviction.

Cianci " who has a radio talk show and his own line of pasta sauce with his face on the jar " currently lives in the Presidential Suite at his city's swank downtown Biltmore Hotel. 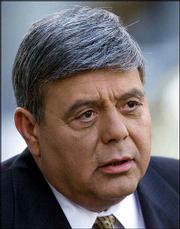 Incarceration will take the limelight's glare off of just about any celebrity. Just ask former Providence, R.I., mayor Vincent "Buddy" Cianci Jr., above, Manhattan publicist Lizzie Grubman, or former congressman James Traficant, all of whom will be spending time behind bars.

He once described to a reporter the advantages of hotel living: "They turn the bed down at night, they leave a chocolate and the weather report in the room for me, and I can walk to work."

If he goes to Elkton, Cianci will give up his private room for a cubicle shared with up to three other men. No television, no private bath, and they don't turn down the bed.

Cianci, 61, would have to surrender the thick salt and pepper toupee that he has admitted to wearing, but in this he would not be alone.

James A. Traficant Jr., 61, who represented Elkton in Congress for 18 years before being convicted on racketeering charges in April and being kicked out of the House, had to give up his hairpiece when he went to prison. In August, he began serving an eight-year sentence at the Allenwood Federal Correctional Institution in White Deer, Pa.

Edwards, who served in the state Senate, the U.S. House of representatives and four terms as governor, had a reputation as a playboy with penchant for gambling and womanizing.

He has said he planned to work on his memoirs and expected to be "a model prisoner." He did not respond to a request for an interview.

Ron Cohen, a former inmate who now helps prepare white-collar criminals for prison time, said for people used to the high life, the hardest part of prison is living by strict rules.