"I can tell you what it's not," says frontman Todd Lewis while attempting to define his new band, Burden Brothers.

"It's not a Toadies show; it's not a Reverend Horton Heat show. We pretty much decided that when we go into a club, it doesn't matter how many people are there, we're gonna make it 1977 arena-style. Not with the hair, hopefully, but we'll make it when rock was fun and big and cool."

Toadies and Reverend Horton Heat aren't just names pulled out of a hat. Lewis was the founder of the first group, whose 1995 album "Rubberneck" went platinum on the strength of singles such as "Possum Kingdom." And fellow Burden Brother Taz Bentley was the drummer for Reverend Horton Heat and Lawrence-based act Tenderloin.

Lewis and Bentley, both longtime members of the Dallas music scene, formed Burden Brothers this year after Toadies oft-delayed second album led to that band's breakup. The new collaboration continues in the razor-tight, somewhere-between-punk-and-metal aggression of Lewis' signature group. But the Burdens place a greater emphasis on songwriting and teamwork ... and a new sense of artistic freedom.

"With the Toadies I've always written music that I wanted to write, and I was always surprised when people dug it," says Lewis, fresh from a drive back from L.A. where his new ensemble just performed a showcase for labels and publishers. "It's the same thing with this: I'm just surprised people are digging it because we're totally self-absorbed."

That inward retreat is likely due to the burn-out Lewis suffered when dealing with Interscope Records and other factors surrounding the Toadies.

"With the second record (2001's 'Hell Below/Stars Above'), the Toadies got tied up in that whole 'get approval for the record, what does the label want, what the hell is our manager doing?' We got a little distracted about how much we were paying people to do stuff for us who were not doing anything at all," he recalls. 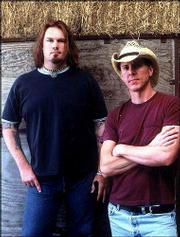 Nancy Newberry/Special to the Journal-World

This resulted in the second Toadies album being released a whopping six years after the first. Once the disc was out, the band played only a handful of shows before one of the members quit and the act split apart. The singer found himself adrift, vowing to avoid the music biz altogether.

But in a "retirement" shorter than Michael Jordan's, Lewis hooked up with the burly Bentley and started tinkering around in the studio.

"My intention was to make a big, dumb-ass metal record," he remembers. "We went in and it didn't come out that way. But I was really happy with it. Then I thought, 'Maybe I'm NOT finished with doing rock."

The pair decided to bypass the typical industry resources and make the Burden Brothers a self-running machine.

"Taz and I both were like, 'Screw it, we'll do it ourselves. We'll keep it low profile and do it over the Web.' Because when you get burned by something, you just want to jump out of it for a bit," Lewis says.

"But after a while we began to realize that what we're doing is pretty decent, and we didn't want to keep it confined."

One of the ways the pair has accomplished getting the word out is by utilizing the Internet to a greater degree than a major label would generally permit. They record an EP (their third is about to be issued), and allow the songs to be downloaded for free at www.burdenbrothersmusic.com.

"But we wanted to make it cooler than just getting some music, so we put a package together," Lewis explains. "The last package was kind of a bar thing with the EP, a shot glass, some drink coasters, T-shirt, sticker, booklet and maybe some other stuff ... Taz is a friggin' marketing genius."

Liberated from the past

The Burden Brothers were so named when Lewis noticed the phrase on the side of a warehouse while driving from Fort Worth to Dallas.

"I just like the connection of family and guilt associated together," he says of the moniker. "It also kind of makes me think of brothers " like me and Taz doing it as a team."

Live, the duo is augmented by two other guitarists and a bassist. Although Lewis always had a guitar strapped to him in the Toadies, he only performs with it on about half the set now, freeing him up to be even more active on stage.

But audiences expecting to hear the frontman belt out a few Toadies tunes in his distinctively feverish voice will not have much luck. Curiously, it's not because of the artist's initial aversion to the idea, but rather his audience's.

"Early on I was like, 'I want to make sure people remember who were are, so we're gonna play some,'" he says. "But the reaction was the opposite of what I thought it would be: People got kind of pissed. I got the sell-out tag. And I was like, 'Man, if I was going to sell out, I'd charge you three times as much at the door and it would be called the Toadies.'" 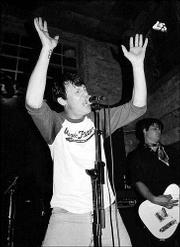