Publicist must script her own comeback

New York — For publicist-to-the-stars Lizzie Grubman, there was the scandal, the media skewering, the mea culpa and the click of handcuffs. Now, in a drill Grubman knows well, there's the comeback.

Grubman gets out of jail Friday after doing time for backing her Mercedes SUV into a crowd of people outside a nightclub, then bolting.

She will have served 37 days of a 60-day sentence at the Nassau County Jail, having gotten time off for good behavior.

The publicist's publicist, Dan Klores, knocked down rumors that Scene 1 of Grubman's second act would be an exclusive network interview.

"I'm sure she'll be back at work on Monday, raring to go," he said. "Her work ethic is second to none."

She was jailed Oct. 23 after pleading guilty to leaving the scene of an accident and assault charges in the incident outside a Hamptons club in the summer of 2001. A teary Grubman apologized to the victims of the crash " "I'm haunted by it daily" " before she was led away in handcuffs.

It was hardly hard time. A slew of reports in the city's tabloids " some generated by Grubman herself in jailhouse phone interviews " revealed she occupied herself with reading a Danielle Steel novel, snacking on Oreos and winning an election as representative of her tier. Life on the inside also meant giving a flannel Victoria's Secret nightgown to a fellow inmate who was cold, and signing autographs for other lawbreakers. 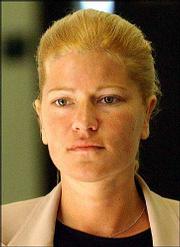 Lizzie Grubman on Friday will complete her jail sentence for backing her Mercedes SUV into a crowd of people outside a nightclub and then bolting. Grubman will have to rebuild her reputation and her client list when she returns to her public relations business.

"Most of the inmates were rather fond of her," said defense attorney Stephen Scaring.

Fisher, once jailed for shooting and wounding the wife of her auto-mechanic boyfriend, warned Grubman about a common jail affliction " foot fungus. "It would look hideous all squished up in a new pair of Prada shoes," she wrote, with the caveat to wear socks to the shower.

The crash heightened tensions between locals on the east end of Long Island and the wealthy out-of-towners who flock there every summer. Some locals viewed Grubman, the daughter of a high-powered entertainment attorney, as just another of rich, spoiled outsider.

The Grubman tale was told in an ABC documentary on the Hamptons. The New York Post sponsored a contest that awarded an SUV like the model Grubman drove. Top associates began to defect from her public relations firm, as did A-list clients.

Klores said Grubman's only offense was being "young and blond and ambitious," and predicted her business would rebound.

"The past year and a half has taught her the invaluable lesson of humility," he said.