Gabor was moving in and out of consciousness after suffering multiple broken bones, cuts and bruises, her husband, Frederic von Anhalt, said Thursday.

"She can't talk," von Anhalt said. "She opens her eyes, but we don't know if she recognizes us."

He said her condition nonetheless appeared to be improving.

Leslie Porras, a spokeswoman for Cedars-Sinai Medical Center, said Gabor was in serious condition but declined to give additional information.

Gabor's daughter, Constance Francesca Hilton, said her mother had a broken arm but no other serious injuries. She denied previous reports from Gerd Birkmann, a spokesman for von Anhalt, that her mother had been in a coma.

Gabor, 85, was in the front passenger seat of a car driven by her hairdresser when the crash occurred Wednesday, von Anhalt said.

"The motor went into the front seat," he said.

Von Anhalt said Gabor was breathing with the help of a respirator, and that her hairdresser also was hospitalized. Further details were not immediately available.

The crash occurred about 4:30 p.m. in West Hollywood as the two planned to go shopping, Birkmann said. 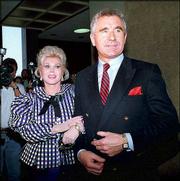 Actress Zsa Zsa Gabor is reportedly in a coma after an auto accident. She's shown here with her husband, Frederic von Anhalt, in a 1989 photo. The 85-year-old Gabor was a passenger Wednesday in a car that struck a light pole on Sunset Boulevard, a family spokesman said.

The cause of the accident was unknown, said Sgt. Bruce Thomas of the Los Angeles County sheriff's department.

For decades, the glamorous, Hungarian-born Gabor has epitomized the celebrity who is famous for being famous. Her furs, jewels, looks - and humor - kept her in the news long after her film career faded.

She was married eight times; among her husbands were hotel millionaire Conrad Hilton and Oscar-winning actor George Sanders. She married von Anhalt in 1986.

"Personally, I know nothing about sex because I have always been married," she joked in a 1987 speech to the American Bar Assn.

In 1989, Gabor was sentenced to 72 hours in jail for slapping a Beverly Hills police officer. She also was ordered to perform 120 hours of community service at a women's shelter.