Los Angeles — Grunge singer-turned-actress Courtney Love and Vivendi Universal Music Group, the world's largest record conglomerate, announced settlement Monday of their lawsuits against each other with a deal that allows the music firm to release songs by her late husband's band, Nirvana.

Universal sued Love in 2000 over five allegedly undelivered albums. She filed a countersuit last year in Los Angeles County Superior Court that sought to break her contract with Vivendi Universal and expose what she called unfair treatment of artists.

Love ï¿½ the widow of Nirvana frontman Kurt Cobain, who committed suicide in 1994 ï¿½ claimed Universal made about $40 million from album sales of her rock band, Hole, while she and band members collected only about $2 million in royalties.

Her lawsuit claimed she was coerced into signing away her rights, including ownership of her music.

As part of the settlement, Universal agreed to waive any rights to future recordings from Love and restore her ownership of unreleased Hole material.

In exchange, Love and the other members of the Cobain estate granted Universal permission to release new Nirvana packages, including a compilation album with a never-before-released track, a box set and a rarities album. Separate permissions were obtained from the surviving members of Nirvana.

Love had once suggested that she would not settle the lawsuit. 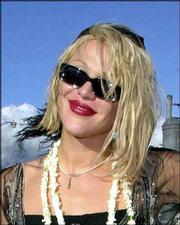 "I could end up being the music industry's worst nightmare: a smart gal with a fat bank account who is unafraid to go down in flames fighting for a principle," Love told the Los Angeles Times in an article. "I'm ready to take this thing all the way to the Supreme Court."

After taking on her recording company, Love joined several artists such as the Dixie Chicks and Don Henley in demanding the freedom to negotiate less restrictive deals to capitalize on their success.

The Dixie Chicks and their label, Sony Music, settled their lawsuits against each other in June.

Love is currently recording a new album, and the first single is set for release in January by Poptones Records.