By By Paul West, The Baltimore Sun

Costa Mesa, Calif. — Arnold Schwarzenegger is handshaking his way, campaign-style, through a mob of admirers at a Southern California mall. From somewhere in the back of the crowd, a man yells out, "Arnold for president!"

Well, no, not exactly. That would be getting ahead of the story.

Schwarzenegger is dipping his big toe into politics this election season. But where he'll end up isn't scripted yet.

In what is widely seen as an audition for a future statewide race, one of Hollywood's biggest stars is aggressively promoting a California measure that would expand state funding for programs that keep children off the streets after school. He's plugging the Nov. 5 ballot initiative through personal appearances and a slick TV ad campaign, financed with more than $1 million of his own money, that identifies him as its author.

"I've had the greatest time with this, and this is not going to be the end of me reaching out and trying to help people," Schwarzenegger said in interview. A future try for high office ï¿½ he seriously considered running for governor this year ï¿½ is "an option," he added.

The actor, active in Republican circles for years, is being talked about as Senate candidate in 2004 or, more conceivably, a candidate for governor in 2006. Not long ago, his strategists, who include most of former Republican Gov. Pete Wilson's campaign team, polled voters on Schwarzenegger's potential as a write-in candidate next month (the idea never went anywhere).

When Schwarzenegger's name surfaced as a possible candidate last year, the chief strategist for Democratic Gov. Gray Davis faxed political reporters a number of unflattering, tabloid-style articles about the entertainer.

Schwarzenegger opted not to run, pleading business and personal obligations. At the same time, he angrily denounced the published reports ï¿½ which claimed he had a history of improper behavior toward women and that his marriage to NBC newswoman Maria Shriver was in trouble ï¿½ as "trash" and "stupid accusations."

His reaction led to speculation that the movie tough guy might be too tender for the rough and tumble of a campaign. He dismisses it with a Trumanesque line and insists he's used to absorbing attacks. 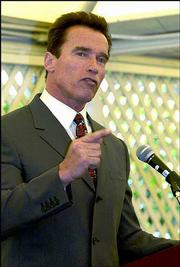 Arnold Schwarzenegger addresses the annual California Society of Newspaper Editors convention in Anaheim, Calif., in this May file photo. The movie star is gaining notoriety within California political circles for his support of Proposition 49 ï¿½ a measure that would expand state funding for programs that keep children off the streets after school. Some think Schwarzenegger is positioning himself for a run for statewide office.

"I would say if you can't take the heat, you have to get out of the kitchen," he said. Politics "is a dirty business, so you have to be thick-skinned. But I think I got a little used to this when I read the reviews of my movies. Ha, ha, ha."

Once the highest-paid film actor in the world, he'd be required as a candidate to disclose his extensive financial holdings. If he does subject himself to campaign scrutiny, his candidacy could have obvious advantages for this state's long-suffering Republican Party, which has dwindling hopes of unseating Davis next month.

The Austrian-born actor, who became a U.S. citizen in 1983, enjoys a degree of celebrity no opponent could match. The public knows him by his first name, and he's worked to identify himself with issues ï¿½ children and education ï¿½ that top the voters' agenda.

His bipartisan private life might well reinforce any crossover political appeal. By marriage, he's part of the Democratic Party's first family, the Kennedys. His father-in-law, Sargent Shriver of Potomac, Md., who according to Schwarzenegger, supports "everything I do," was the Democrats' vice-presidential candidate three decades ago.

As an outsider, he's positioning himself above the partisan feuding that turns voters off. With a politician's eye toward making everyone happy, he says he brought Republicans and Democrats together in drafting his initiative.

"Everyone made their little changes, which had no impact on the initiative, but it made them feel like they had a hand in it," he said.

His moderate social views (he favors abortion rights, gun control and adoption by gays) could pose a problem in a Republican primary. But he's already showing considerable savvy as he counters the objections of conservative Republicans, who, polls show, are less supportive of his initiative than Democrats.

In TV ads and speeches, he says his after-school plan won't require new taxes. It would actually save taxpayers money, he claims, by reducing crime, while lowering the number of dropouts and raising test scores.

Opposition to the measure, known as Proposition 49, has come mainly from good-government groups and some labor unions, which say it would force the state to divert up to $550 million from other programs. They say if Schwarzenegger succeeds, other powerful figures will try to get voters to approve guaranteed funding for their pet projects, putting further pressure on a state government that projects a budget gap of more than $10 billion next year.

But opponents haven't raised money to advertise against the ballot measure, and polls suggest it is likely to win approval.

Celebrity candidates are a quintessentially Californian phenomenon, though none has won major statewide office since Ronald Reagan was elected governor more than 30 years ago. Among those who failed: the late Sonny Bono, who lost a Senate race but wound up in the House of Representatives after being mayor of Palm Springs.

"There's a certain sales resistance he has to overcome because a lot of Californians think of him as either a cop or a murderous android," said Jack Pitney, a political scientist at Claremont McKenna College in Pomona, Calif. "But he's literally the embodiment of self-discipline. He didn't get to be Mr. Universe without that. He's extremely intelligent, and he's extremely shrewd."

Privately, Republican insiders say Schwarzenegger's potential as a candidate won't really be known unless he actually becomes one and starts to campaign. They also suggest that his team of political advisers may be more excited about his running for governor than he is.

"I have to decide: Do I want to get out of show business or not? I haven't made that decision," says Schwarzenegger, 55, who recently completed work (for a $30 million salary) on "Terminator 3," due out next summer.