New York — The last time Renee Fleming was to sing in "Il Pirata" in the United States, she was so nervous she was desperately hoping she wouldn't have to go on.

Fleming was the cover singer for Aprile Millo, who was getting ready for a 1989 concert performance as Imogene, the starring role, at Carnegie Hall with Eve Queler's Opera Orchestra of New York.

"I'd be bringing her tea, telling her, 'Stay healthy, please!"' Fleming recalls.

After "Il Pirata," she's off to the Lyric Opera of Chicago for her first staged performances in Massenet's "Thais" and to the Houston Grand Opera for her first Violetta in Verdi's "La Traviata."

She has a new solo recording, "Bel Canto," and is trying to get Ann Patchett's novel of the same name made into a movie. She's just finished a recording of show tunes with Bryn Terfel and plans to record her first jazz album.

Oh, and the 42-year-old soprano is raising two daughters.

Still, she's expected to be perfect ï¿½ and glamorous ï¿½ at all times.

"I feel the sense of expectation the public has for my work," Fleming said.

The bel canto repertoire ï¿½ the so-called "beautiful singing" often filled with ornamentation ï¿½ would seem an unusual choice for a lyric soprano who became a star in the early 1990s for her work in Strauss and Mozart. 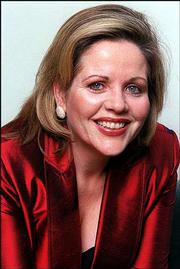 Imogene, who has one of opera's great "mad scenes," will be her most high-profile bel canto role to date.

"I really like the repertoire. People really love it," she said. "There's so much pathos. Of course, these are the ones I pick. You have those big, plush beautiful melodies. When the music is at its best, it's a pure expression of emotion, loss, longing."

Her big, silvery voice has no trouble with the coloratura in these works. Some criticize her exaggerated phrasing in spots, but it seems to fit, and her "Bel Canto" recording on Decca is one of the season's top releases.

To prepare for bel canto work, she listened to recordings by Maria Callas, Montserrat Caballe, Beverly Sills and Joan Sutherland.

"I feel so much the weight of the great singers who revived this repertoire 30 years ago," she said.