New York — Marisa Tomei has been busy since winning the Academy Award as best supporting actress for 1992's "My Cousin Vinny" ï¿½ busy, but not always acclaimed.

"I've had a career that has had ups and downs, like most actors' careers," she says, curled up on a hotel sofa. "I guess I thought I'd be the exception. I'm not. It's up and down."

After more than a dozen movies, plus appearances on Broadway, off-Broadway and television, the last year or so definitely has seen an upswing, with her subtle Oscar-nominated turn as a bereaved girlfriend in "In the Bedroom."

For anyone who still thought her first Oscar nomination was a fluke, Tomei still bristles.

"I'm sensitive to it because it makes it sound like, 'Where were you for 10 years?' It felt like I was a miserable failure for 10 years and now I'm vindicated," she says. "Of course, it hurt my feelings.

"Everybody has their own measure of what success is to them and what they want out of life. It's not up to media or anybody to judge when somebody's life is going well or not."

While many critics thought her "In the Bedroom" performance was the best of her career, she responds: "I don't think people have seen one-tenth of what I can do. It all depends on the right part coming along. I don't think I can do everything, but I know that I can do a lot more."

Tomei, 37, shows some of that versatility in her new film "Just a Kiss," playing a psychotic bowling alley attendant who reads fortunes in beer rings and has a penchant for sadomasochism.

Tomei thrilled director and longtime friend Fisher Stevens by throwing herself into the part.

"I've worked with her a lot and she just has this ability to get right into it and she's willing to really take chances," Stevens says. "A lot of actors nowadays are more about the way they look, but the first thing with her is the role: What is the character? What does she want in this scene? Not 'What does she look like? What is she wearing?"' 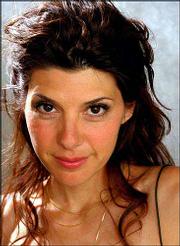 Actress Marisa Tomei has been battling expectations since she stunned Hollywood by winning the best supporting actress Oscar for "My Cousin Vinny." In her new film, "Just a Kiss," Tomei plays a psychotic bowling alley attendant who reads fortunes in beer rings.

Tomei, raised in the Flatbush section of Brooklyn, dropped out of Boston University after her freshman year to join the soap operas "One Life to Live" and "As the World Turns." Later, she appeared in "A Different World," the spinoff of "The Cosby Show."

Her film debut, a one-line role ("Oh my God, you're so drunk!") in 1984's "The Flamingo Kid," led to work as Sylvester Stallone's daughter in "Oscar" and then the gum-snapping, auto-mechanic turned cosmetologist in "My Cousin Vinny."

Her Oscar win stunned Hollywood, and Tomei's career took off, with roles in the films "Chaplin," "The Paper," "Only You," "The Perez Family," "Four Rooms," "A Brother's Kiss," "Welcome to Sarajevo," "Slums of Beverly Hills," "Someone Like You," and "The Watcher."

Along the way, she has grown tired of playing quirky, ethnic or lower-class characters.

"Is it because I have brown hair?" she asks. "Because I actually originally came from Flatbush?

"There's a lot of feeling boxed in, but then I feel like I've been successful," she says, then adds with a chuckle: "Maybe I'm just getting into a bigger box."

Tomei has tried to shake things up, hitting the stage as a member of Naked Angels theater troupe and appearing in "Fat Men in Skirts," and Tony Kushner's "Slavs!" Her Broadway debut came in 1998 opposite Quentin Tarantino with the savagely reviewed "Wait Until Dark."

Despite the rough spots, Tomei says she seems to have maintained a reservoir of good will from fans.

"I really do feel that people are happy for me. I get the general gestalt, I get the vibe. I just can't seem to get that to translate into more options for me," she says with a sigh.

Tomei, whose recent films include "What Women Want," has two more in the can: "Anger Management" with Jack Nicholson and Adam Sandler, and "The Guru" with Heather Graham.

"When I started, I was naive and I think as I've grown older, the difference is knowing myself a lot better and making better choices," she says. "That probably means listening to the voices that say 'Go for this!' 'Try to make that happen!' or 'Let that go!' That's the best you can do. That's where I am right now."